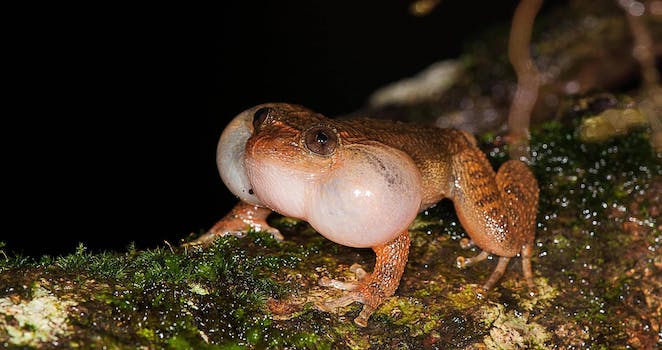 Researchers in India have discovered a new sex position for the Bombay night frog.

According to their observations, the male of the species grasps a nearby branch, leaf, or tree bark while mating, rather than grasping the female around the waist like other frogs do.

Rather than the sperm meeting the egg inside the body of the female, frogs use external fertilization. Usually, frogs will practice some form of “amplexus” or the male positioning his cloaca (the opening where the sperm comes out) over the female’s cloaca. The female then begins laying eggs and the male fertilizes them as they come out. In many species, the male grasps the female tightly to achieve this feat.

But in Bombay night frogs, the male just hangs onto whatever leaf the female is on and releases his sperm over the female’s back. The female then lays her eggs, which are fertilized by the sperm dripping off her back. It may sound a little “wham, bam, thank you ma’am,” but at least it’s efficient—100 percent of the eggs get fertilized. The researchers didn’t only watch the frogs get it on—they also noted the courtship rituals (which involve the female sitting on the male’s head) and how many fertilized eggs reach maturity (about 20 percent; predators eat the rest.)

The study is viewable to the public on the open access journal PeerJ. There is also a video that explains the major findings of the research.

According to the researchers, it’s important to understand how animals like Bombay night frogs mate so that their habitats can stay protected. For example, if deforestation reduces the amount of vegetation to hang onto, the frogs might have trouble mating.