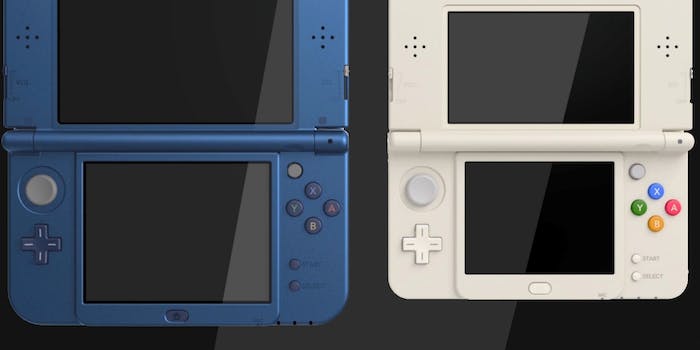 The New Nintendo 3DS debuts at the Tokyo Game Show

In its latest upgrade, 3DS has a bigger screen and a second control stick.

Nintendo handhelds always go through multiple iterations until they get it just right. That time may have arrived for the 3DS.

Journalists are getting their first hands-on with the New Nintendo 3DS at the Tokyo Game Show, and it addresses most of the issues faced by the original 3DS. The New Nintendo 3DS has the larger screen, and a second analog stick (technically an analog nub, but we’ll take it), and additional shoulder buttons.

Demand for this feature on the 3DS was so high that Nintendo offered an official peripheral that added a second stick one could attach to the right side of the original 3DS, and then another peripheral, which was only offered through Nintendo’s online store, for the larger 3DS XL.

The New Nintendo 3DS finally addresses the issue of a second stick, without the need to purchase anything beside the handheld itself.

There are actually two different New Nintendo 3DS units. One is the size of the original 3DS, with the addition of the new buttons. Then there’s the New Nintendo 3DS LL, which has the larger screen of the current 3DS XL.

If your head is spinning from all the different handhelds we’re talking about, welcome to par for the course with Nintendo and handheld game hardware. They’re always improving, making consumers wonder whether it’s time to buy or wait for the next version.

Take the Nintendo DS handheld, for example. It went through three iterations to make it smaller, give it a brighter screen (DS Lite), then a larger screen and cameras (DSi), and then a much larger screen (DSi XL), which was the one you wanted, if you were willing to give up backwards compatibility with Game Boy Advance cartridges.

The Nintendo 3DS is following a similar pattern. There’s a version that plays 3DS games in only two dimensions, the 2DS, because some people feel nauseous from the glasses-free 3D technology. For people who like the 3D, and who want a much larger screen, there’s the 3DS XL.

The New Nintendo 3DS units will not be coming to North America until sometime in 2015. The New Nintendo 3DS is being released Oct. 11 in Japan, though, so North American consumers will get to see how the new units fare when they’re put through the ringer by gamers. Then you can decide whether or not this really is the 3DS worth getting off the fence for and make the purchase already.