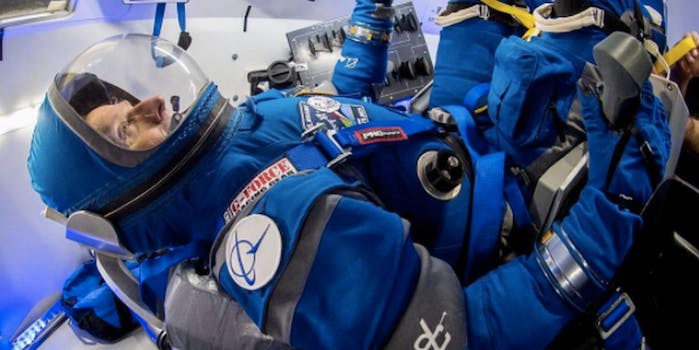 Why so blue, Boeing?

NASA’s iconic space suits could be getting a makeover, but for fresh 2017 fashion, these sure seem familiar.

On Thursday, Boeing revealed its designs for the Starliner Ascent/Entry suit for its commercial crew members. Though there are small tweaks throughout the suit for comfort and ease of use (there’s only so much you can do for sleekness on these things, but it’s ostensibly less bulky too), one change immediately sticks out: It’s blue.

Suiting up for the future of spaceflight! Today we unveiled the Starliner Ascent/Entry suit Boeing-NASA Commercial Crew astronauts will wear when the CST-100 Starliner launches into space returning the United States to human spaceflight. The sleek, modern astronaut-designed suit is less bulky than previous spacesuits. Former NASA Astronaut, Chris Ferguson (shown here), Boeing's director of Starliner Crew and Mission Operations and a former space shuttle commander was instrumental in modernizing the design so astronauts are more comfortable and can see and hear better. Ferguson said aside from being modern, safety is paramount. “It’s a suit that will get Starliner astronauts home” Ferguson said. View our Instagram Story to see the full Starliner Ascent/Entry suit. #NASA #Boeing #CommercialCrew #Starliner #Space #NASAKennedy #NASAJohnson #BoeingSpace

If you take a closer look, you’ll note a couple of other helpful changes: The gloves are now touchscreen-compatible, the helmet is functionally a zip-up hoodie, etc. But is it revolutionary? Twitter users immediately snarked that they’d seen this design before; they just couldn’t quite put their finger on where.

Was it Stanley Kubrick’s 2001: A Space Odyssey?

It’s not the first time Earthlings have explored more colorful designs for spaceflight. An Imgur user compiled this collection of astronaut fashion choices from around the globe.

Whatever the inspiration, at least the astronauts won’t be confused for Michelin Men anymore.

"We have encountered the Earth astronaut. It appears to be the creature they call the 'Michelin Man'"