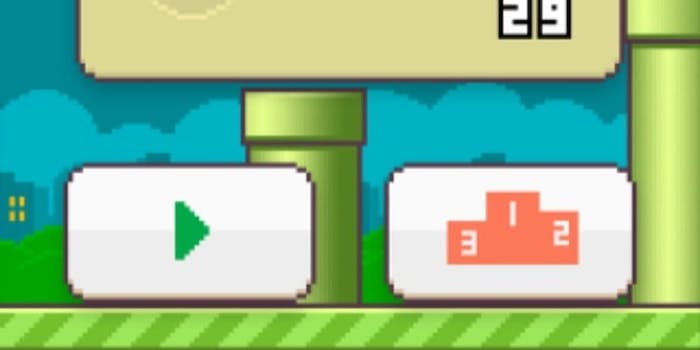 Flappy Bird is coming back with a ‘cooling down’ feature

Dong Nguyen’s weird little flying simulator that took the world by storm will be making its triumphant return.

The weird little flying simulator that took the world by storm will be making its triumphant return. Flappy Bird creator Dong Nguyen is bringing the game back—with a few tweaks.

The addictive game was taken off the App Store and Play Store shortly after its popularity boom because creator Dong Nguyen found the game harmful.

In an interview with Forbes in February, Nguyen claimed that Flappy Bird “happened to become an addictive product. I think it has become a problem. To solve that problem, it’s best to take down Flappy Bird. It’s gone forever.”

Three months later, Nguyen has reconsidered. In an interview with David Kushner, the developer revealed the new Flappy Bird would have a “cooling-down system” after a few rounds; players will have to wait a few minutes before diving back in.

Although this feature sounds as a good safeguard, impatient gamers might find the feature frustrating.

Nguyen has also decided to give the game a more communal feel, mainly with the addition of a multiplayer mode.

Flappy Bird will also see a major facelift in the art department. Gone is the 8-bit retro art design with green pipes reminiscent of Mario’s Mushroom Kingdom. Instead, we’ll see something more stylized.

At this point, there are endless clones of Flappy Bird out there. It seems that Nguyen has been in the process of trademarking the title in an attempt to ward off the copycats.

Flappy Bird 2.0 still doesn’t have a release date, but we do know that it will be returning “not soon.”