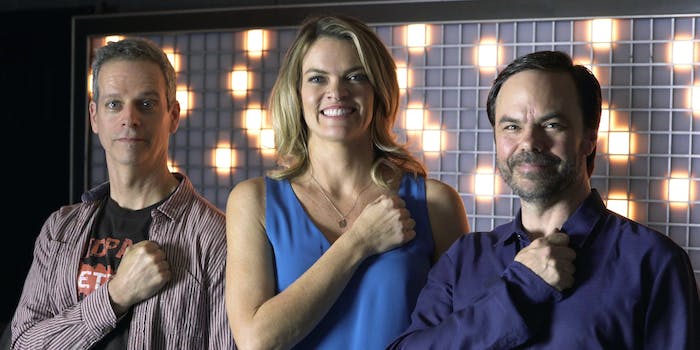 ‘Never Surrender: A Galaxy Quest Documentary’ peels back the layers behind a cult classic

Nearly the entire cast and crew came together to reveal how the film got made.

Never Surrender: A Galaxy Quest Documentary kicks off with a quote from Pulitzer Prize-winning playwright David Mamet, who called Galaxy Quest—the 1999 space comedy that lovingly satirized Star Trek and convention culture but can stand on its own—a perfect film alongside The Godfather, Dodsworth, and A Place in the Sun. It’s a bold claim, serving as a threshold for the amount of reverence Never Surrender and the people involved with the documentary have with the film.

RELEASE DATE: 11/26/2019
DIRECTOR: Jack Bennett
RELEASE: Theatrical
On the eve of Galaxy Quest’s 20th anniversary, the film’s cast, crew, and some of its most famous fans reveal how Galaxy Quest got made and the cultural impact it left behind.

If you’re already a fan of Galaxy Quest, you don’t need much convincing about what’s so great about it; you already know. If you’re a bit dubious or haven’t seen it, Never Surrender—which is produced by Fandom and Screen Junkies—offers a strong and often persuasive argument for why people love it so much. And as Galaxy Quest is about to approach its 20th anniversary, Never Surrender is a fascinating look (one that’s sometimes viewed through rose-tinted glasses) at what went into making a film that shouldn’t have worked.

That’s not to say that the cast and crew go out of their way to pretend that making Galaxy Quest was smooth sailing; it wasn’t by any stretch of the means. It was one of DreamWorks’ first projects, it included a screenwriter and director with little experience (the latter replacing Harold Ramis), seemingly no actor wanted the role that Tim Allen eventually played, and the movie was screwed by its marketing, which seemed to think that Galaxy Quest was a family-friendly holiday movie instead of the R-rated comedy planned from the start. Many of the behind-the-scenes issues aren’t exactly unique in the entertainment industry.

Yet, as Never Surrender captures so well, Galaxy Quest ended up being something like lightning in a bottle. It’s the kind of movie that made Star Trek: The Next Generation star Brent Spiner jealous, that made Spiner’s co-star Wil Wheaton declare it as the best Star Trek movie (yes, even above Wrath of Khan), and that made filmmakers and now-professional nerds like Damon Lindelof, Greg Berlanti, and Paul Scheer (who was attached to the Galaxy Quest TV show in the works that’s on hold) all positively giddy just thinking back on it.

“When you talk about the fans, you’re talking about us,” Lindelof says. “We’re one of you.”

At its core, Never Surrender is an in-depth and behind-the-scenes glimpse into how Galaxy Quest got made from the people who made it. Nearly the entire cast of the film—from Tim Allen, Sigourney Weaver, and Sam Rockwell to supporting players like Justin Long, Missi Pyle, and Jed Rees—all make appearances alongside several key players behind the camera. It dives into the minutiae of filmmaking, revealing Easter eggs and smaller details along the way; even if you already know that information, it doesn’t feel stale.

It does branch out to reveal the impact of the film among its fans including Roxanne and Harold Weir, a couple who cosplay as Thermians, in the lead-up to a fan screening of Galaxy Quest. (They also went at the world premiere at New York Comic Con in cosplay.) But the film is far more focused on the production side of things. On one hand, you get the kind of stories you dream about hearing about filming. But sometimes, ignoring what’s unspoken, or how an actor’s political views might affect how you view something beloved that they’re in, leaves a little something to be desired. It also means that, between the cast and crew, the majority of the people interviewed are white men, which is only a partial reflection of the fandom both then and now.

And then there’s the Alan Rickman-shaped hole of it all. It’s not that Rickman, who died in 2016, was left out of the documentary. It’s far from it, and there’s a visible shift in tone as the cast shares memories of him as they talked about how warm and supportive he was even underneath an English exterior. Some of the most delightful moments of Never Surrender are candid stories about Rickman on-set; director Dean Parisot shares home movies he made for his children, which featured Rickman in costume charmingly ragging on their dad. As is often the case, Rickman gets the best line of the entire documentary, which occurred during the filming of one of Galaxy Quest’s most emotional scenes.

At one point, Berlanti notes that Galaxy Quest wouldn’t get made today because geeks are no longer the underdogs. That’s true, in a sense: geeky properties rule the box office with Marvel movies and Star Wars movies consistently bringing the largest hauls; Game of Thrones was the most popular TV show in the world. Going to a fan convention, even one specifically geared toward a single television show, is no longer a niche activity; chances are highly likely that the fan who ultimately helps save the day would not look like Long.

But in another sense, Galaxy Quest was the kind of mid-budget film that might not get made today because of its oddities. It would probably cost too much money for an indie film while also being something overlooked by studios spending hundreds of millions on major blockbusters. It got to be weird and embrace its geekiness, inspire dozens of projects that came after it, and even with its earnestness on its sleeve, Never Surrender demonstrates one key thing: Galaxy Quest, and the message it carries (including that of its title), is timeless.

Never Surrender: A Galaxy Quest Documentary will be released in theaters as part of Fathom Events on Nov. 26.