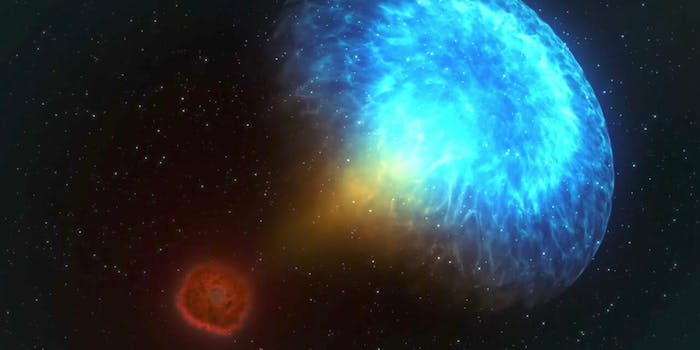 It's the first time this cosmic event has been detected like this.

Scientists announced Monday that they have discovered the presence of gravitational waves and light in the collision of two neutron stars, giving us even more insight into a historic cosmic event.

Although astronomers have observed gravitational waves before, this marks the first time that an event of this nature was observed through gravitational waves and light. The Laser Interferometer Gravitational-Wave Observatory (LIGO), which is based in the U.S., the Virgo detector (based in Europe) were behind the discovery, with 70 different observatories. Their results appeared in Physical Review Letters. The event is being called “GW170817” in reference to the day it was discovered: Aug. 17, 2017.

According to the findings of LIGO and Virgo, two neutron stars—tiny stars that are formed when “massive stars explode in supernovas”—produced gravitational waves as they spiraled around one another in August and were visible for about 100 seconds. Once the neutron stars collided, light was visible on Earth for approximately two seconds, but other kinds of light were discovered days and weeks after the event. The close proximity in time between both events intrigued scientists, so they explored it further before discovering the two events were linked to one another.

The European Southern Observatory and NASA (with MIT and Caltech, both of which operate LIGO observatories) have both released animated renditions of the event, which shows two stars circling around one another before they collide and explode.

“It is tremendously exciting to experience a rare event that transforms our understanding of the workings of the universe,” National Science Foundation director France A. Córdova said in a statement. “This discovery realizes a long-standing goal many of us have had, that is, to simultaneously observe rare cosmic events using both traditional as well as gravitational-wave observatories. Only through NSF’s four-decade investment in gravitational-wave observatories, coupled with telescopes that observe from radio to gamma-ray wavelengths, are we able to expand our opportunities to detect new cosmic phenomena and piece together a fresh narrative of the physics of stars in their death throes.”

You can read more about the cosmic event at the Atlantic, the New York Times, and MIT.