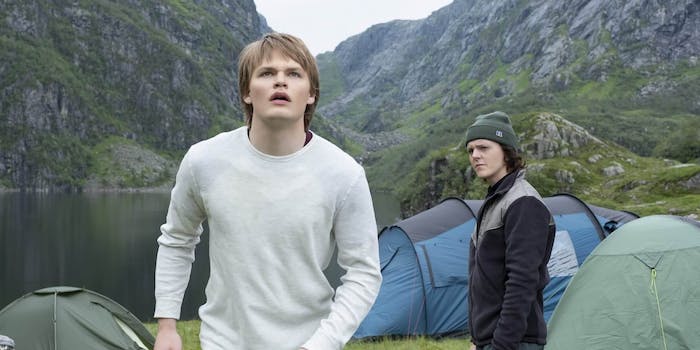 Think 'Teen Wolf,' but starring Thor and Loki at a Norwegian high school.

If you told me that Netflix’s Ragnarok started out as a high school AU fanfic for Marvel’s Thor franchise, I wouldn’t be surprised. Drawing from the same Norse mythology source material, the two main characters are teen brothers Magne and Laurits, who just moved to the small Norwegian town of Edda. Magne (David Stakston) is a looming blond with anger-management issues. Laurits (Jonas Strand Gravli) is a clever, sexually ambiguous goth with a mean sense of humor and pointy facial features.

RELEASE DATE: 1/31/2020
CREATOR: Adam Price
STREAMING: Netflix
Inspired by Norse mythology, ‘Ragnarok’ brings Thor and Loki to a Norwegian high school, in a rather silly teen drama that riffs on shows like ‘Teen Wolf’ and ‘Sabrina.’ But don’t expect any sophisticated storytelling here.

They’re very clearly Thor and Loki, but just in case you didn’t realize, the first episode features a high school history class about Norse myths. By episode 2, Magne realizes he can predict the weather and fling a hammer across town. Ragnarok is basically a more serious-minded version of schlocky teen fantasy shows like Teen Wolf, combining goofy fairytale concepts with an apocalyptic story about climate change. While it’s not exactly sophisticated, I can see how it might resonate with the Riverdale crowd—if not for a tiresome creative choice that’s likely to put many people off in the first episode.

Ragnarok is hardly on the cutting edge of teen culture. The climate change angle could add a sense of realistic urgency to a retelling of apocalyptic Viking myths, but the general set-up (the villains are a Twilight-style family of rich immortals polluting the town with an Evil Factory) feels pretty dated. At first, the only voice of reason is a blue-haired outcast called Isolde (Ylva Bjørkaas Thedin), who basically plays the Julia Stiles role from 10 Things I Hate About You. It really doesn’t feel like an authentic story about Gen-Z kids facing apocalyptic climate change, and Isolde is a total stereotype, right down to her untimely demise in episode 1. Just a few minutes after coming out as a lesbian, she gets electrocuted. Yes, it only takes Ragnarok one episode to go full “bury your gays.”

It’s truly baffling to realize how many TV writers don’t understand why this trope is so offensive. Killing off a queer character isn’t a value-neutral statement, especially when she dies shortly after we find out she’s gay, and her death exists to motivate a male hero’s storyline. Considering the show’s quasi-political concept and its target audience of teens who enjoy shows like Sabrina, this isn’t a smart move. There’s a significant crossover in the Venn diagram between “people who want to watch a teen drama about Thor and Loki” and “people who post about queer representation on Tumblr,” and they’re already familiar with the controversy surrounding the Bury Your Gays trope.

As you can probably tell from the trailer, Ragnarok is pretty silly. The simple plot seems better suited to a show for slightly younger viewers, but it moves fast enough to be entertaining in a Teen Wolf kind of way, especially the unintentionally-funny moments like when Loki (sorry, Laurits) spontaneously embarks on a theatrical dance performance with the two Evil Rich Kids in the middle of a party. It’s not boundary-pushing material, and while you might be briefly tricked into thinking it’s a supernatural riff on Norway’s cult teen series Skam, the similarities are purely superficial.

Just six episodes long, Ragnarok is a low-effort choice for fans of supernatural teen TV, but don’t expect any complex storytelling, or a particularly clever twist on familiar Norse mythology.