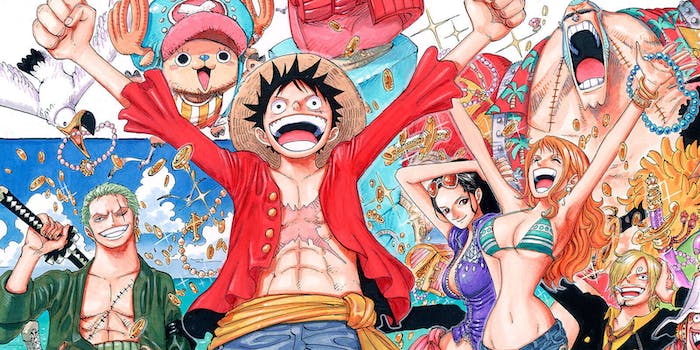 'One Piece' will follow in the footsteps of Netflix's live-action 'Cowboy Bebop.'

Netflix is continuing to court anime/manga audiences, announcing another live-action adaptation in the wake of its hotly anticipated Cowboy Bebop remake. The popular manga series One Piece is going to become a 10-episode TV series produced by Tomorrow Studios, the people behind the live-action Cowboy Bebop.

One Piece is already a colossal multimedia franchise, although in the U.S. it’s mostly restricted to anime fan audiences rather than being a mainstream hit. Created by writer/artist Eiichiro Oda in 1997, the original manga is now 95 volumes long, telling a fantasy adventure story about a boy who leads a pirate crew, hoping to become the King of the Pirates. So far, this bestselling series has spawned anime adaptations, video games, novelizations, theme parks, and a ton of merchandise, but this will be the first live-action One Piece show.

If you’re a One Piece fan and you want regular updates on how the show is going, you might want to follow its Twitter account, which just posted a message from One Piece creator Eiichiro Oda, who will oversee the adaptation. The message confirms that the show has been in the works since 2017, helmed by showrunners Steve Maeda (The X-Files) and Matt Owens (Agents of S.H.I.E.L.D.).

Given the popularity of the One Piece manga and anime series, we won’t be surprised if this Netflix adaptation is a fairly big-budget operation. Netflix’s live-action Cowboy Bebop stars John Cho in the lead role, so you can probably expect some similarly famous names to appear in One Piece. There’s no official release date as of yet.