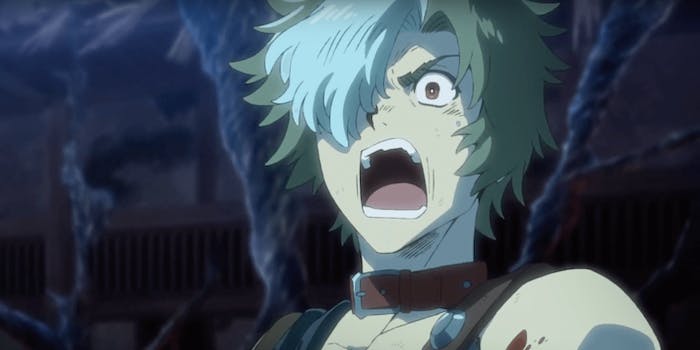 ‘Kabaneri of the Iron Fortress: The Battle of Unato’ is pure anime junk food

The feature-length continuation of the anime series is all flash, no substance.

Netflix has seen fit to release the movie Kabaneri of the Iron Fortress: The Battle of Unato free of any previous context. Considering it’s a continuation of a 2016 TV series, released through Amazon Prime with little promotion or fanfare, and makes no attempt to get new viewers up to speed, I suspect relatively few people who stumble across it on Netflix will have any idea what’s going on.

Kabaneri of the Iron Fortress: The Battle of Unato

So, here’s a quick summary:

Kabaneri of the Fortress comes from the same studio and director as the smash hit Attack on Titan. Its premise is largely the same, but instead of walled cities being under siege from huge humanoid monsters, humans use fortified trains to protect themselves from kabane, fast-moving zombies that are difficult to kill with their level of technology. The main character, Ikoma, was bitten by a kabane, but managed to stop himself from turning into one. Instead, he is a kabaneri, something between kabane and human. He teams up with Mumei, a 12-year-old fellow kabaneri, to fight the kabane. Most people distrust them, and there is awkward romantic tension between them because, once again, Mumei is a child. 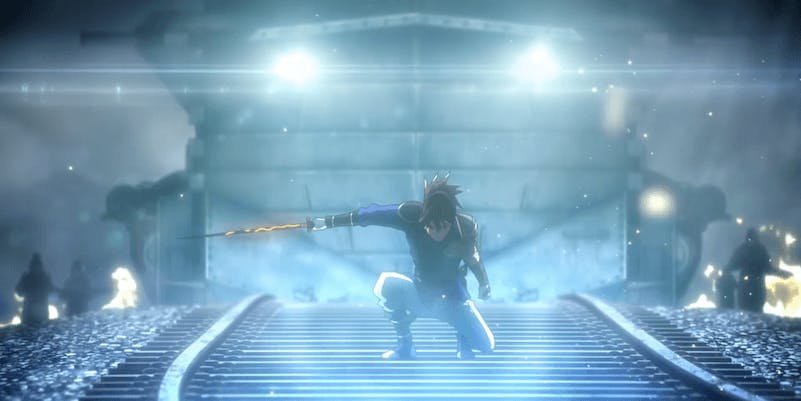 I watched Kabaneri well before this movie came out, and I wasn’t enamored of it. It looked great and the action was consistently strong, but the character writing was lacking, most notably and uncomfortably with Mumei. The Battle of Unato continues that trend, but with even more gorgeous animation and even weaker writing.

Make no mistake: This is a stunningly beautiful film, in terms of both design and fluid animation. The characters, with their bright kimono and technicolor hair, offer rare splashes of color in a bleak, ravaged world. The design marries 1800s Japan and industrial revolution steampunk in a way that feels fresh and interesting. The characters have dynamic body language and facial expressions, and the action is fast-paced and fluid. Mumei and Ikoma work beautifully as a team, the former acrobatic and graceful, the latter blunt and forceful. Fans who watch anime primarily for its imaginative, innovative action will find The Battle of Unato a pure joy. 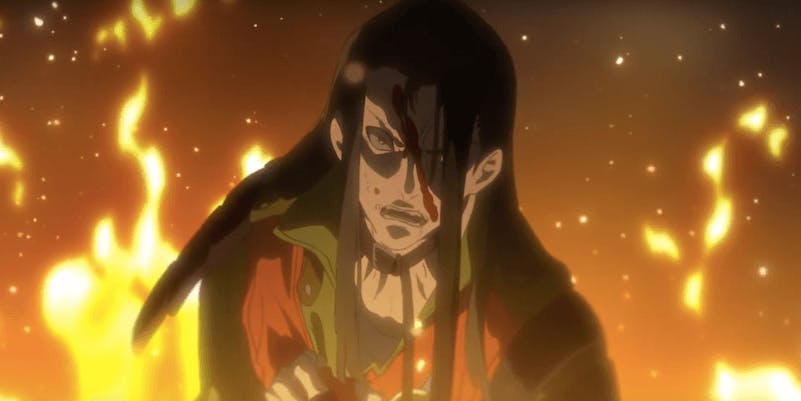 However, for viewers who like a little substance with their style, this movie is severely lacking. The vast majority of its runtime focuses on the action but falters in its quieter moments. Since the beginning of the TV show, Ikoma has had to cope with society distrusting him because he was a kabaneri, and occasionally losing control of himself. It’s certainly not the most interesting or original approach to a protagonist who has suddenly transformed into something more powerful and misunderstood, yet Ikoma faces it countless times. The Battle of Unato decides to go over this yet again, as the humans accuse Ikoma of summoning the vast hordes of kabane that continue to threaten Unato.

This lack of originality comes as no surprise—the TV series ran out of steam after the first half and fell to narrative pieces in the second—but Mumei’s plotline is even less inspired. The Battle of Unato continues threads that were present in the TV series, but Mumei’s characterization has always been somewhat thorny. She’s presented as a discomfiting mix between tough warrior, helpless and naive preteen girl, and a sexpot for the male gaze. It’s almost Joss Whedon-esque, bringing to mind the worst parts of how Buffy Summers and River Tam were presented in their respective shows. 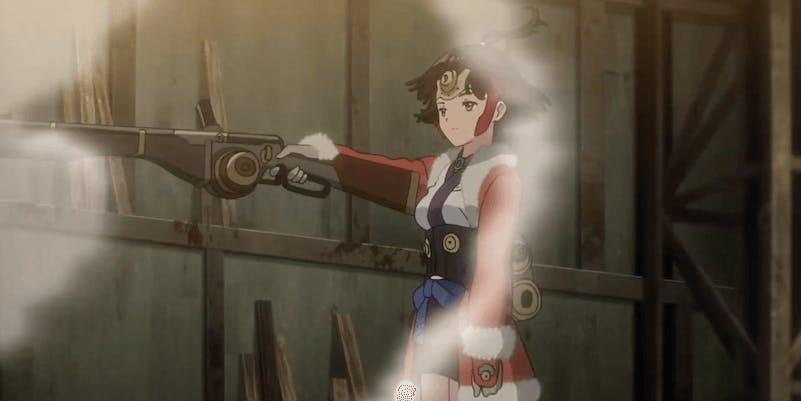 Mumei’s grand plotline, when she’s not blasting away kabane, is she wants to handcraft a gift for Ikoma, and some of the girls on the train want to encourage her. That’s it. It’s dull and cliche, adding no complexity or interest to her character. It’s filler, designed to break apart action scenes and draw Mumei back into the acceptable confines of femininity. What’s more, Mumei and Ikoma are 12 and 17 years old, respectively, though the writers seem to have forgotten that; asking the audience to root for any kind of romantic bond between them is beyond the pale.

Kabaneri of the Iron Fortress: The Battle of Unato is pure anime junk food. It offers bright, shiny packaging and a lot of substance-free action scenes. But when it comes to more nourishing elements—story, characters, thematic heft—it’s completely empty. There’s nothing wrong with craving that once in a while, but don’t come looking for anything to feed the mind or soul.