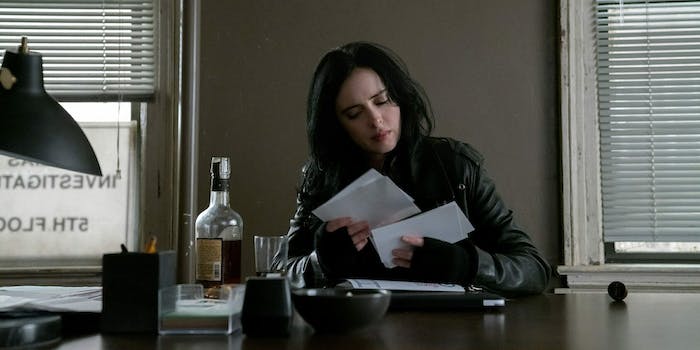 Jessica partners with a newly superpowered Trish Walker to take on an elusive serial killer.

With Netflix cancelling the Defenders franchise and Marvel moving to Disney+, Jessica Jones returns like a relic from a bygone era. Season 3 wraps up one of the most mature superhero shows on TV, starring Krysten Ritter as a private investigator with super strength and a notoriously bad attitude.

After casting Jessica as a self-destructive loner in the first two seasons, season 3 wisely gives her more screen time with her adoptive sister Trish Walker (Rachael Taylor). Determined to follow in Jessica’s footsteps, Trish gained superpowers last season. Since then, she’s become another one of New York’s street-level vigilantes, obsessed with “doing the right thing” even when she’s clearly doing more harm than good, with little thought for the consequences. Meanwhile, Jessica—who actually does understand the complicated reality of superheroism—is now on a more even keel, hiring a businesslike new assistant (Aneesh Sheth) to organize Alias Investigations.

No longer controlled by the ghosts of their pasts, both women are newly proactive about their futures. But for once, Jessica seems like the sensible one, with Trish swapping one addiction for another. Even after dropping the performance-enhancing drugs, Trish exists in a permanent state of keyed-up aggression, juggling her perky celebrity persona with her new hobby of beating people up in alleys. She’s clearly headed for some kind of catastrophe, a common theme for characters in this show.

Overtaking Trish and Jessica’s impressive talent for self-destruction, Jeri Hogarth (Carrie-Anne Moss) may be the most disastrous one of all. Still holding on to her lucrative career as a lawyer, she’s busy torpedoing her private life: a serial philanderer with no compunction about ruining other people’s careers and relationships for personal gain. She’s a wonderful illustration of how no person ever sees themself as the bad guy. In scenes from Jeri’s perspective, the tone and even the music are deeply sympathetic, as Jeri worries about her ALS diagnosis or tries to seduce an old girlfriend. But of course, just because she feels sorry for herself doesn’t mean she’s in the right. Every choice she makes is both self-serving and deeply harmful to someone else, making her a compellingly complicated figure in the hero/villain dynamic of the Defenders franchise.

Speaking of villains: Season 3 obviously had to introduce a new one. Moving on from the super-powered antagonists of the first two seasons, it’s time for Trish and Jessica take on an old-school serial killer. This makes for a characteristically gripping crime thriller, but it’s nowhere near as thematically interesting.

In season 1, Kilgrave was a chilling avatar of rape culture: a charismatic abuser who could get away with anything, leaving Jessica with lasting trauma. It was one of the hardest-hitting stories we’ve seen from a Marvel adaptation, and season 3’s villain feels oddly basic by comparison. He’s a staple of the genre: a creepy, middle-aged man who hides his violent urges beneath a banal exterior and is too fiendishly smart to get caught. Pop culture loves this kind of serial killer, and while I enjoy Hannibal as much as the next girl (probably more), the trope doesn’t do anyone any favors.

TV is full of fascinatingly clever murderers who play complicated games of cat-and-mouse with the police. Meanwhile, the history of real-life serial killers is littered with police incompetence, with detectives missing obvious evidence or just failing to investigate the deaths of vulnerable minorities. The Zodiac Killer is the exception, not the norm. Fictional characters like Dexter and the new Jessica Jones villain just bolster the illusion that serial killers are quirky, elusive geniuses. People would rather morbidly glorify these men as superhuman monsters than acknowledge the failures of law enforcement—an idea that might actually be a better fit for Jessica Jones’ cynical outlook.

Of course, your mileage may vary when it comes to serial killer media. If you love Jessica Jones for its social commentary, then this storyline may be a letdown; there’s at least not much to chew on in the eight episodes released to critics. But if you’re just watching it as a straightforward thriller, Jessica Jones season 3 is still in fine form. It’s also a little less grim than before, and for the first time, the show hints that Jessica might actually achieve a happy ending.