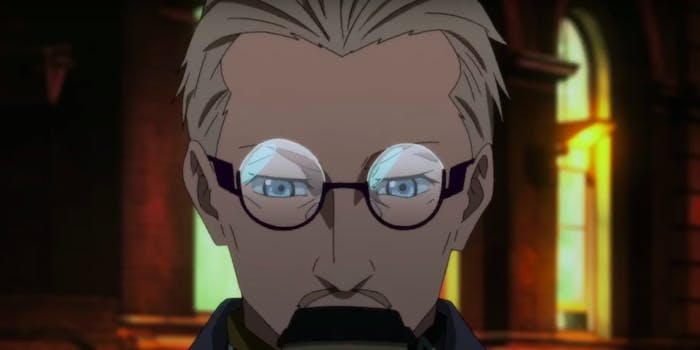 I’ll be honest: So far, the vast majority of Netflix original anime has done nothing for me. From B: The Beginning to Lost Song, I’ve found almost every single one to be narratively weak and thematically lacking, with only a few notable exceptions. I sincerely hope that each new series I watch will break this pattern and present me with something interesting and challenging. Hero Mask, however, not only continues that pattern, but displays a complete lack of original thought or even basic storytelling competence.

Hero Mask kicks off with one of the biggest cliches of police action stories: James Blood is a loose cannon cop who doesn’t play by the rules. He has to break several regulations to apprehend the criminals he’s pursuing (without backup, for some reason), but in the end manages to bring them in. Back at the station, he’s called in for a meeting with his supervisor, Lennox Gallagher, who lectures him about his choices but then praises him for being one of the best detectives in the SSC.

It’s a stunningly unoriginal choice, a well-worn trope played completely straight, signaling that Hero Mask doesn’t really know how to do anything but string together a series of plot devices punctuated with gun violence. The story kicks off with the death of a woman—prosecutor Monica Campbell—and follows Blood and Sarah Sinclair, Monica’s protege who gets told repeatedly to back off, but just can’t let it go because she’s too emotionally involved, damn it. Together, they unearth a conspiracy led by an evil corporation that goes all the way to the top. It’s just cliche after cliche after cliche.

But plots don’t need to be original to be engaging. Interesting characters with rich personalities and complex motivations can still redeem a contrived story. With 15 episodes, Hero Mask has more time to develop these things than the average 12-episode anime series. Unfortunately, it doesn’t. Not at all. Most characters are little more than ciphers, paper dolls who exist to move the plot and shoot their guns. I didn’t know anything more about Blood by the time the final credits rolled than I did after the first 10 minutes.

The first episode introduces Grimm, a man from his past who supposedly died in prison but has shown up alive, with the ability to change his face at will thanks to the titular mask. But instead of revealing anything about Blood or affecting the plot in any substantial way, Grimm acts unhinged for a while, kills a bunch of nameless uniformed officers, paints on a canvas with his own blood, and then dies, never to be mentioned again.

The next few episodes focus on Theo Lowe, another supposedly dead former prisoner who has a mask that gives him superhuman reflexes that allow him to dodge bullets. Theo’s episodes are the high point of the series; he just wants to get back to his wife and four-year-old daughter, who have no idea that he’s still alive. Theo’s a character with an actual motivation and some pathos worth investing in, but just like Grimm, he disappears quickly from the story with no actual impact on the plot.

After Theo and Grimm, I figured the series would consist of several mini-arcs about people like them—legally dead ex-convicts bearing masks from the prison experiments conducted on them. Instead, the plot delves into the corporate conspiracy behind the masks and Monica’s death. From there on, things often hinge on coincidence and are, quite frankly, dull.

Some action series still work with poor storytelling and thin characters; when the point is to be thrilled rather than to think, style with no substance can be okay. You don’t want to follow complex twists or cry for the characters, you just want to see people shoot each other up real good. If that’s what Hero Mask managed, it would be fine, if certainly not Anime of the Year. Unfortunately, Hero Mask’s visual direction is just as lacking as its storytelling.

It’s not poorly animated in the way that anime typically is. The characters move smoothly and stay on-model, even if they are oddly glassy-eyed. The cars look like cars, the guns look like guns, the dog looks and moves like a dog. But everything else is as poorly conceived and put together as the plot.

Many action sequences consist of rapid-fire cuts. The camera angle changes every second or so, making it difficult to follow what exactly is happening or enjoy the simple pleasure of a well-choreographed fight or a character getting out of a tough spot in an unexpected way. Contrivances drive the action, and the poor direction makes it easier to realize how little sense it makes when Grimm takes out an entire room full of cops standing stock-still with a single gun, or when Blood fights a man in the middle of traffic on a busy street.

The final scene, as Blood and Sinclair stand at Monica’s grave, offers no sense of resolution or catharsis. That would require some sort of emotional investment, a reason to care about these characters and their lives that never comes. Hero Mask is as empty and shallow as an abandoned Batman cowl the day after Halloween.