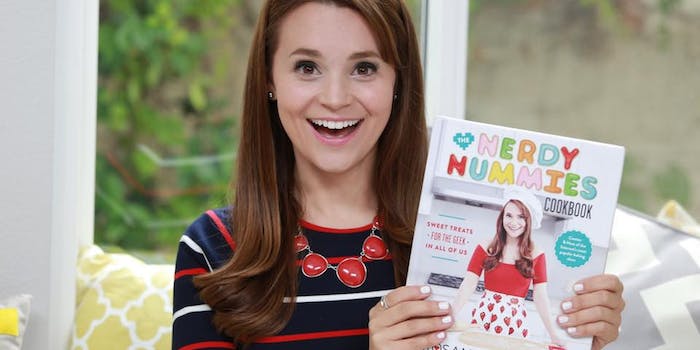 No more sticky frosting fingers on your laptop.

From Lord of the Rings donuts to Captain America shield pizza, YouTube personality Rosanna Pansino has baked a lot of deliciously geeky treats on her webshow Nerdy Nummies.

And soon you’ll be able to try some of her recipes without getting frosting on your laptop.

Pansino is releasing her own book titled The Nerdy Nummies Cookbook: Sweet Treats For The Geek In All Of Us this fall. In her book announcement video, Pansino says she decided to make it because of requests she’s received from fans over the years for a cookbook. The book has more than 400 photos and themed chapters like math and science, space, fantasy, and sci-fi.

“Sometimes I’ll get ideas in the middle of the night.” Pasino told the Daily Dot. “Sometimes at 3 in the morning I’ll get up and I have a notebook by my bed and have to write it down. I’ll dream an idea. Sometimes I see an image online and I think, ‘OK, let’s make that a three-layer cake!'”

There will be some familiar recipes that have been revamped, but most of the book contains new recipes.

It’s fun to see this geeky baking show expand beyond its YouTube home. If you’ve followed Pansino’s Nerdy Nummies work, you know she’s created some impressive geek-themed food since starting the show in 2011. For those unfamiliar with the show, take a look at her Game Boy ice cream sandwiches, Guardians of the Galaxy Groot cookies, and Pi pie pops videos below to get a taste of the types of recipes that will most likely be in the book.

“My kitchen has slowly grown into a stocked baking pantry,” she said. “I have every kind of sprinkles now.”

The Nerdy Nummies cookbook website will be updated with more information including her book tour dates in the future. The cookbook is currently available for pre-order and will be released Nov. 3.

Updated 6pm CT, July 28: This story has been updated with comments from Pansino. Staff Writer Rae Votta contributed to this report.