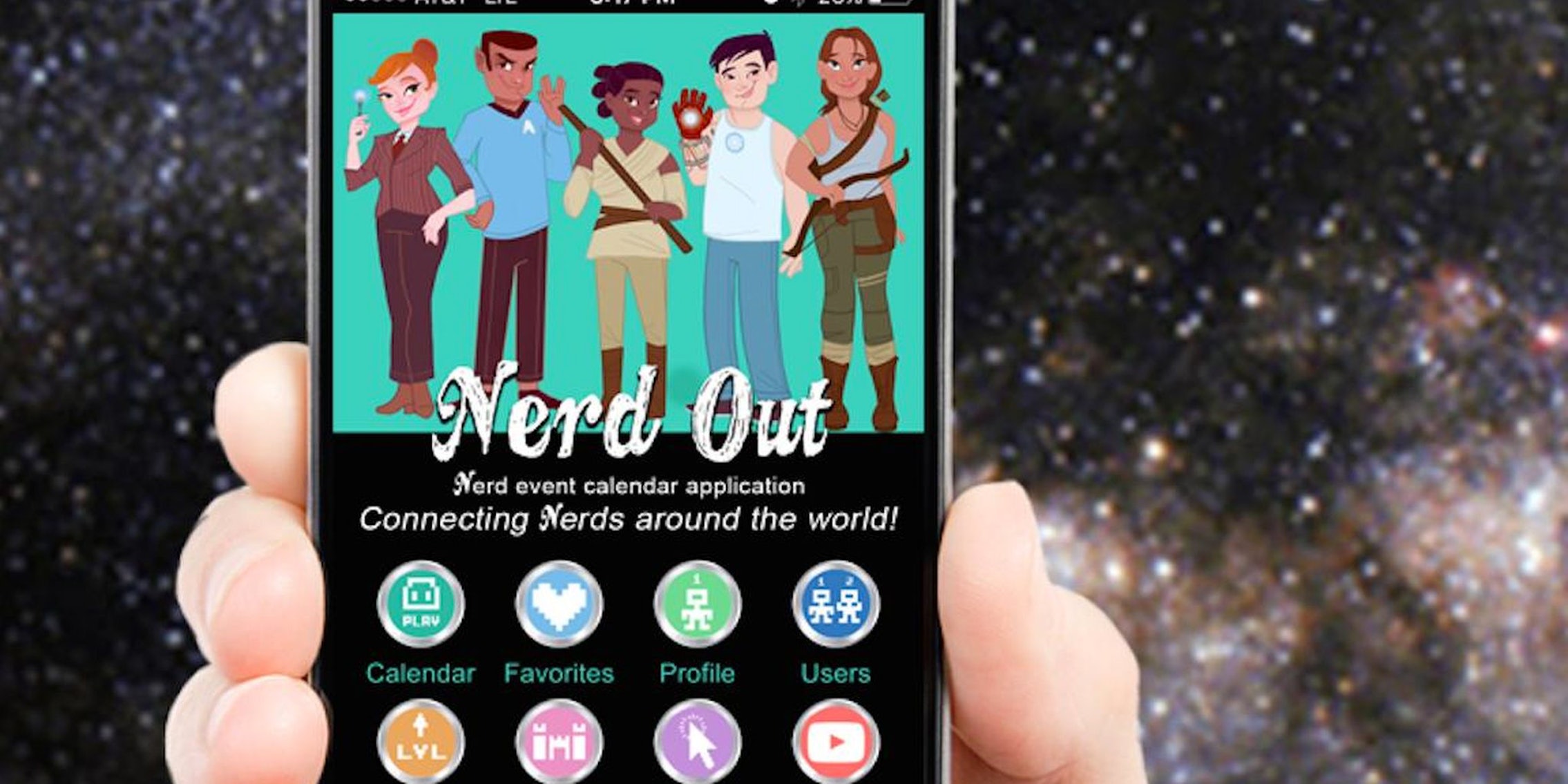 This app can help you find cool stuff to do—if you're in the right place.

Conventions get a lot of attention, but they’re far from the only events where geeks get together. Even the occasional trivia night is only scratching the surface of what could be happening near you, and that’s where the Nerd Out mobile app comes in.

Nerd Out is a free app available for Apple and Android devices that aims to be your ultimate nerd event calendar. Michelle Jensen, founder of the app and creator of the blog Your Friend Elle, told the Daily Dot that she got to thinking about how people find discover events as she was sifting through invites sent to her blog. This line of thought led her to coming up with the initial idea for Nerd Out in April 2015. She wanted to create a single place where people could easily find information about events. Even though Jensen had never worked on an app before, she thought it was a good fit for her idea.

“It’s perfect for an app, because when you’re at places like comic con or just somewhere on the go, it’s right in your pocket. You don’t have to go searching for it,” she said. 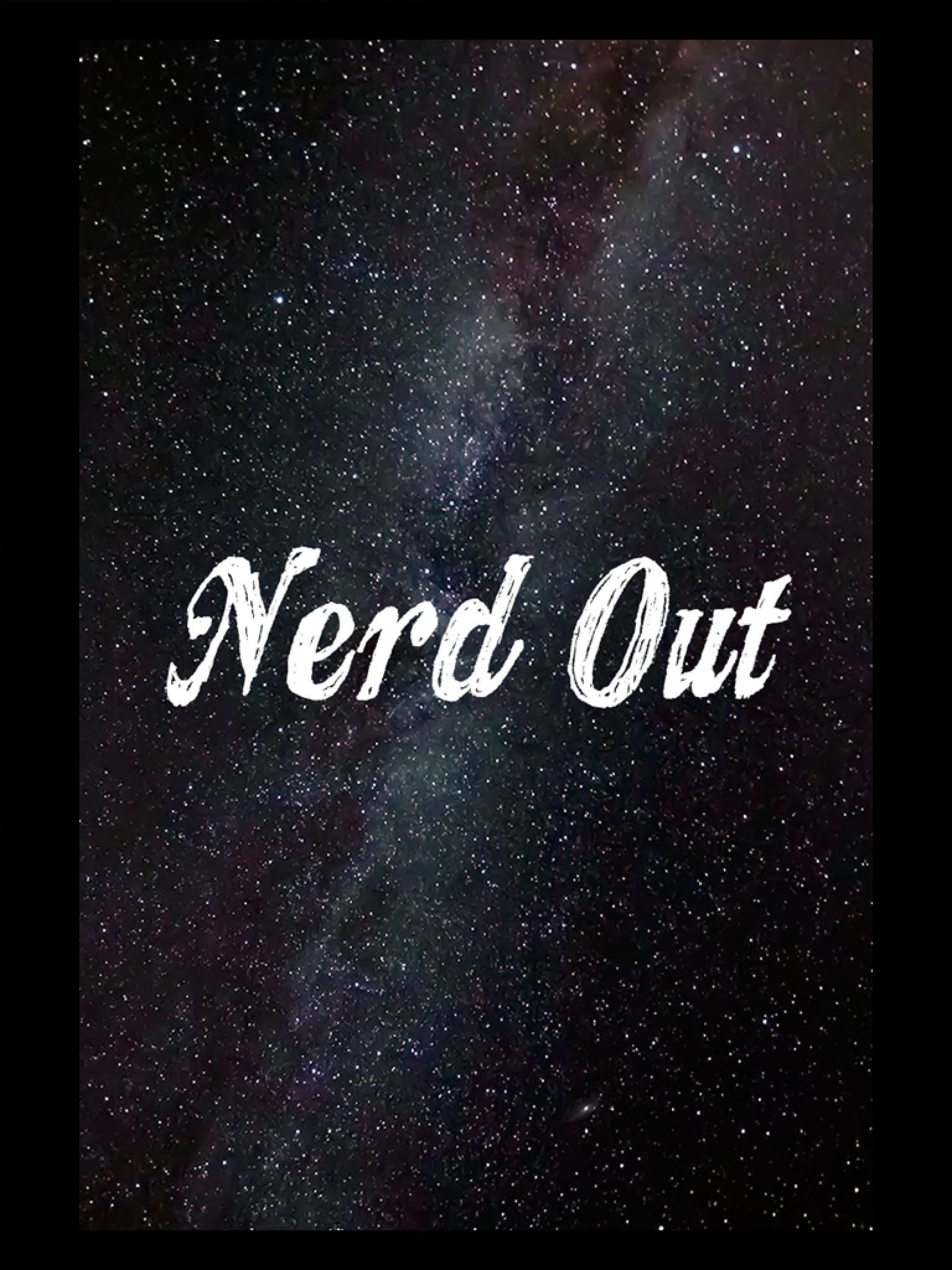 Despite a failed Indiegogo campaign to try to crowdfund money for the app, Jensen forged ahead and Nerd Out is now a reality. It has some work to do before it can be considered a comprehensive nerd event calendar for everyone everywhere, but if you live in or are visiting one of the locations the app includes, it is definitely worth checking out.

I tried it on an Android device (my phone) and an Apple device (my iPad). The app was easy to download on both and the Android version looked great right away.

The iPad version looked the same except for the main menu screen, where the option buttons overlapped with the words. Using the iPad app also sometimes resulted in the main menu disappearing from the screen after I returned to it from exploring a section. Sometimes the options in the menu returned after a moment and sometimes I needed to close out of the app and reopen it. In this case either the buttons would be there instantly or it would still be blank and it would take a few more minutes before the options reappeared. This didn’t happen on the Android version. 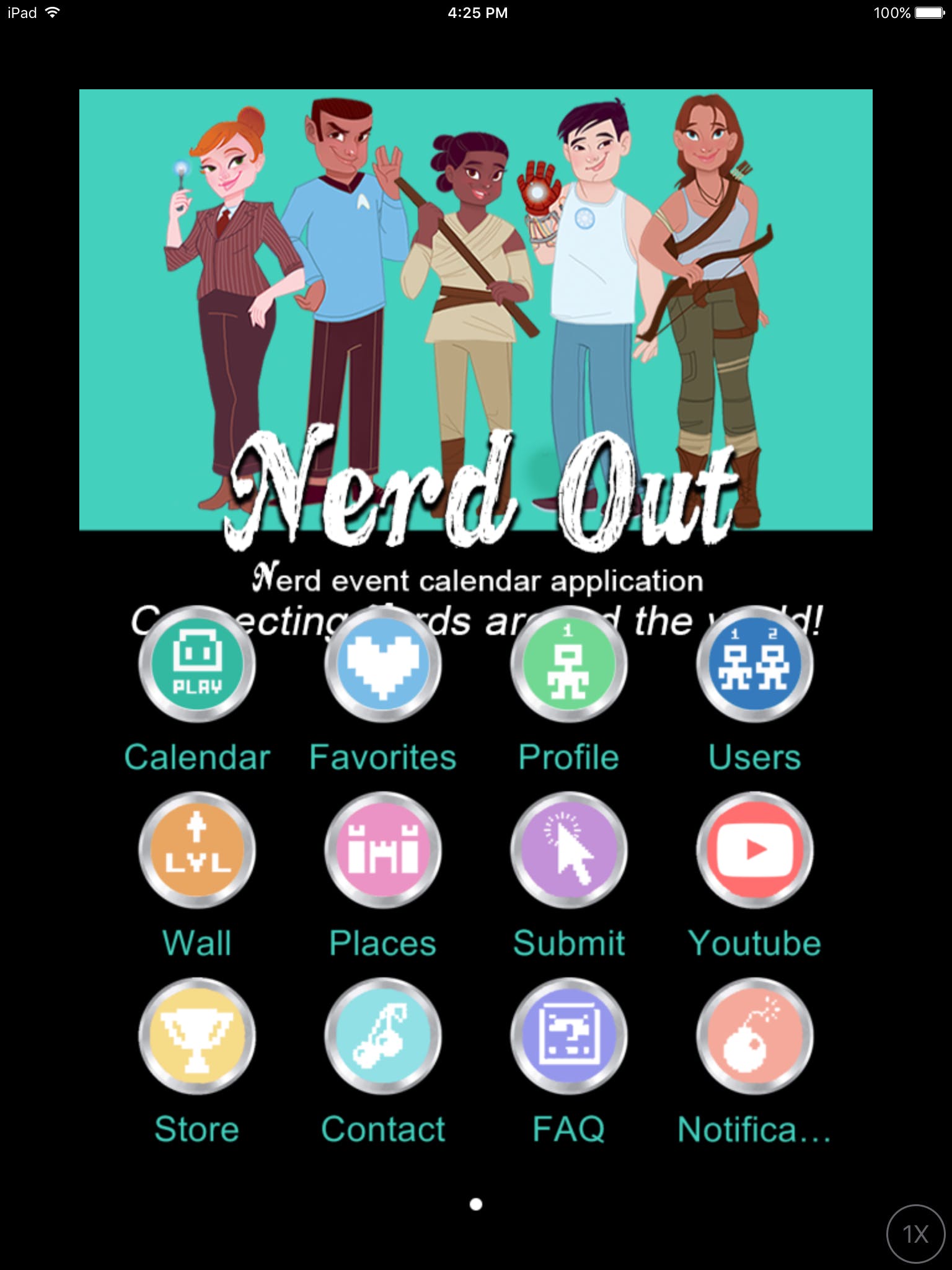 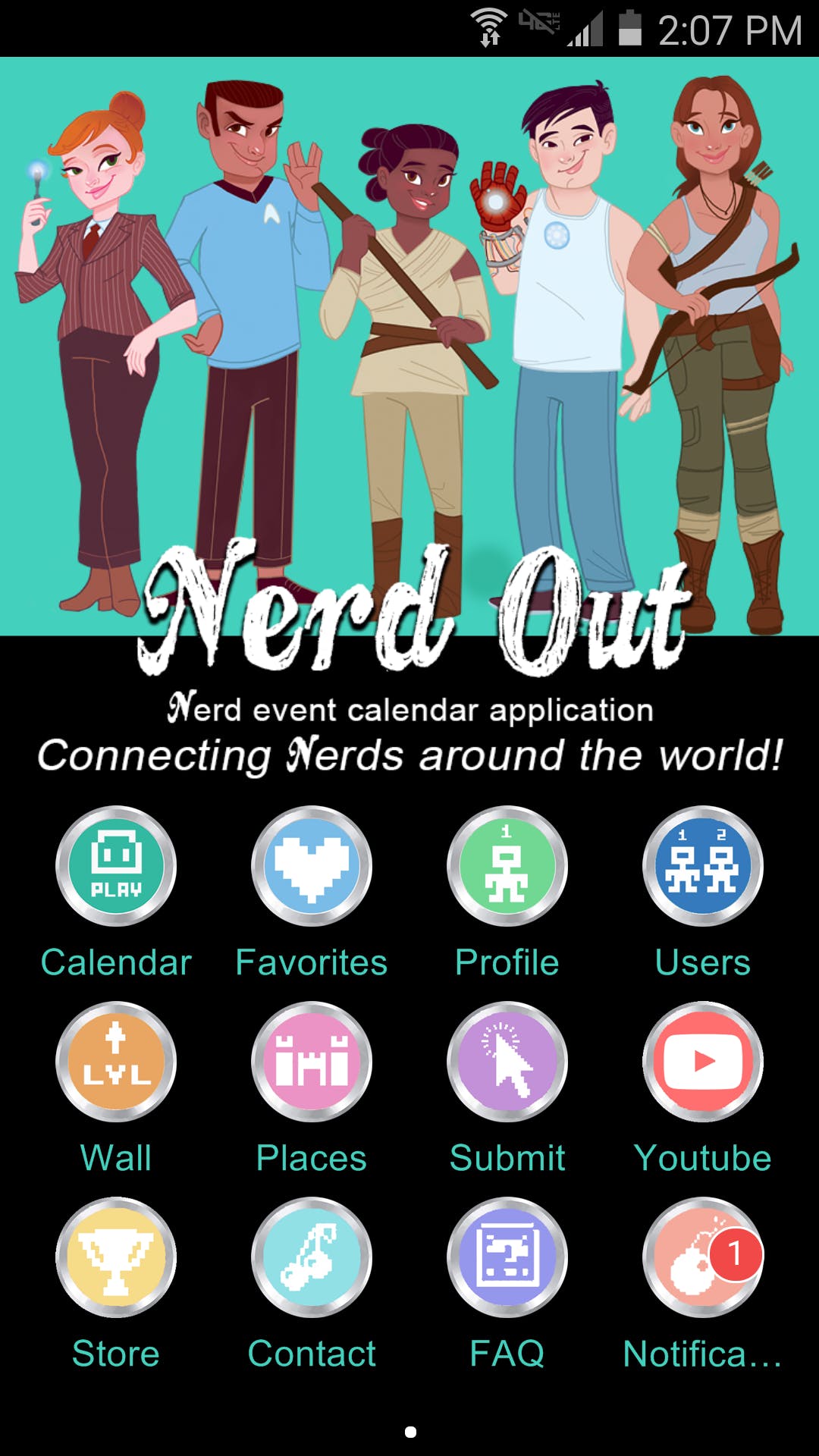 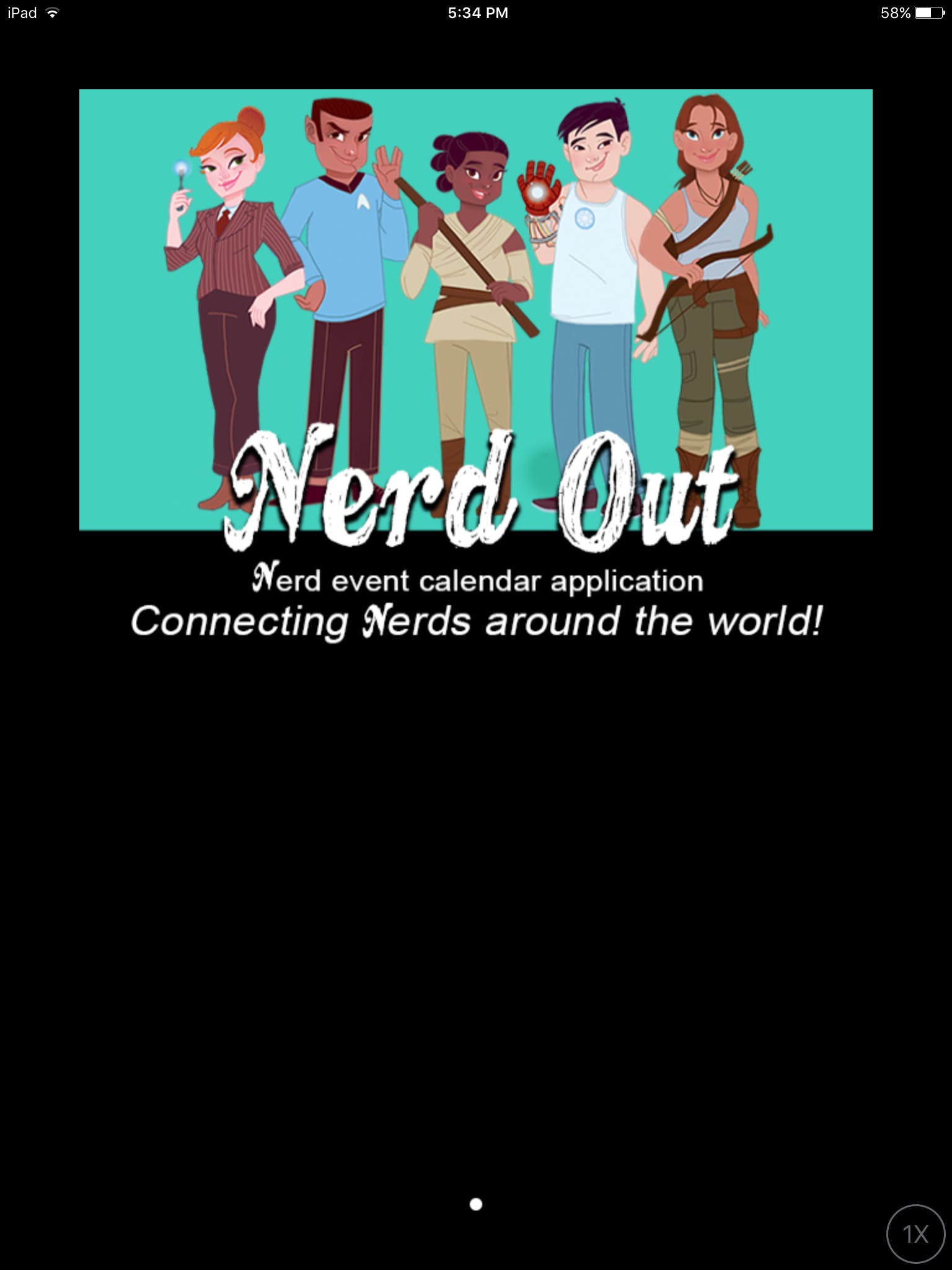 When it came to exploring the various sections, the app was easy to use. You don’t have to create an account in order to use the app, but there are a few functions that won’t work if you don’t sign up. When you click into the calendar, you can choose from a list of locations. Most of them are in the United States, but there are two United Kingdom locations as well as a place to explore general international events. When you choose a location you have a few ways to view the events taking place. You can look at the events in a list view or a map view and also limit what you see. You can sort them by one-time events, recurring events, conventions, and screenings. The general international option only has a list view, but allows you to sort by book releases, holidays, movie releases, and TV premieres.

Each view also lets you look up specific dates and search within its events in case you have something specific you’re looking for. Unfortunately trying to use the search feature on my phone and iPad always resulted in an error message, even when I tried it at different times (and I made sure my connection was still OK). It was fairly easy to just browse through each view to see what was available. 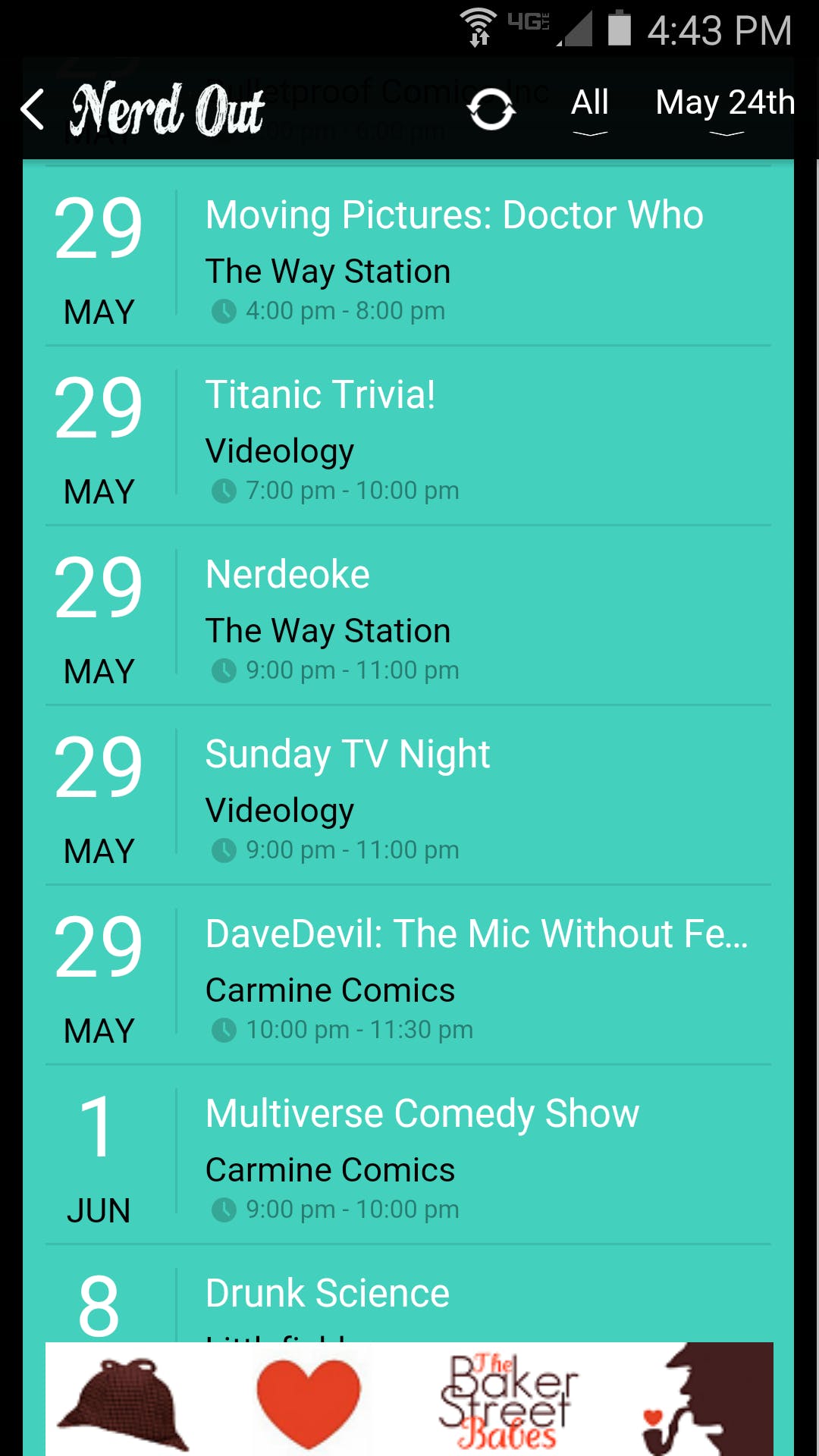 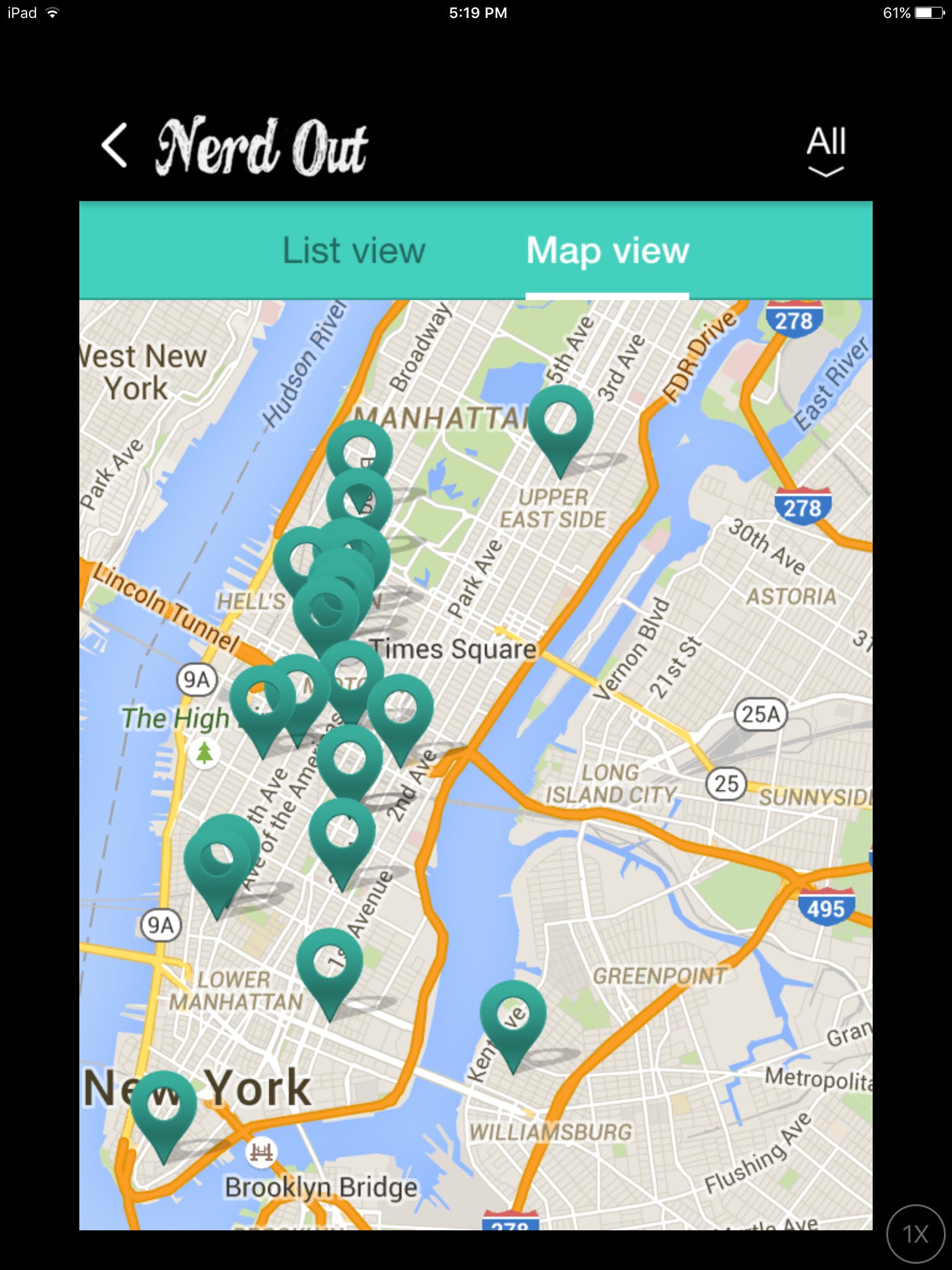 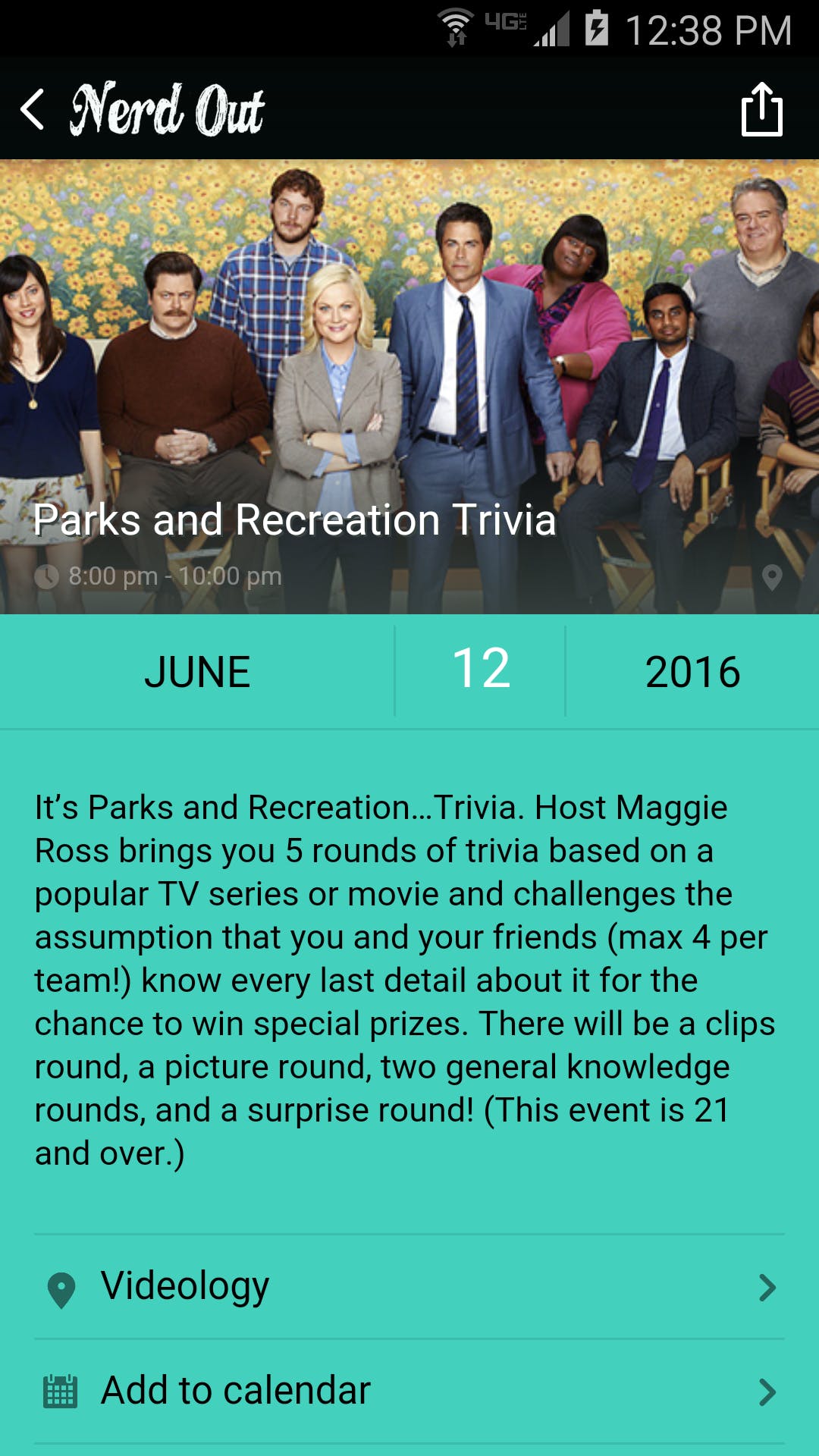 Clicking on an event will give you more information about it. You can also add it to your calendar, learn more about the location and other events taking place there, add it to your favorites, or share it with others on Facebook, Twitter, through email, or through text. You can see your favorites easily using the main menu button in list or map view.

Adding events to your favorites requires having a Nerd Out account, which you can sign up for or just sign in using Twitter or Facebook. Once signed up, you automatically get Jensen as a friend, and you can customize your profile with the usual information like a username and photo. The app also allows you to browse users, search for friends, and if you have an account, see a user’s activity and who they are friends with via their profile.

Looking at a friend’s activity can be slightly confusing. You see their status posts as well as their comments on other posts, but there’s no way to tell them apart. That makes it’s hard to figure out what’s what. The comments are also confusing because you can’t see the original conversation thread for context. 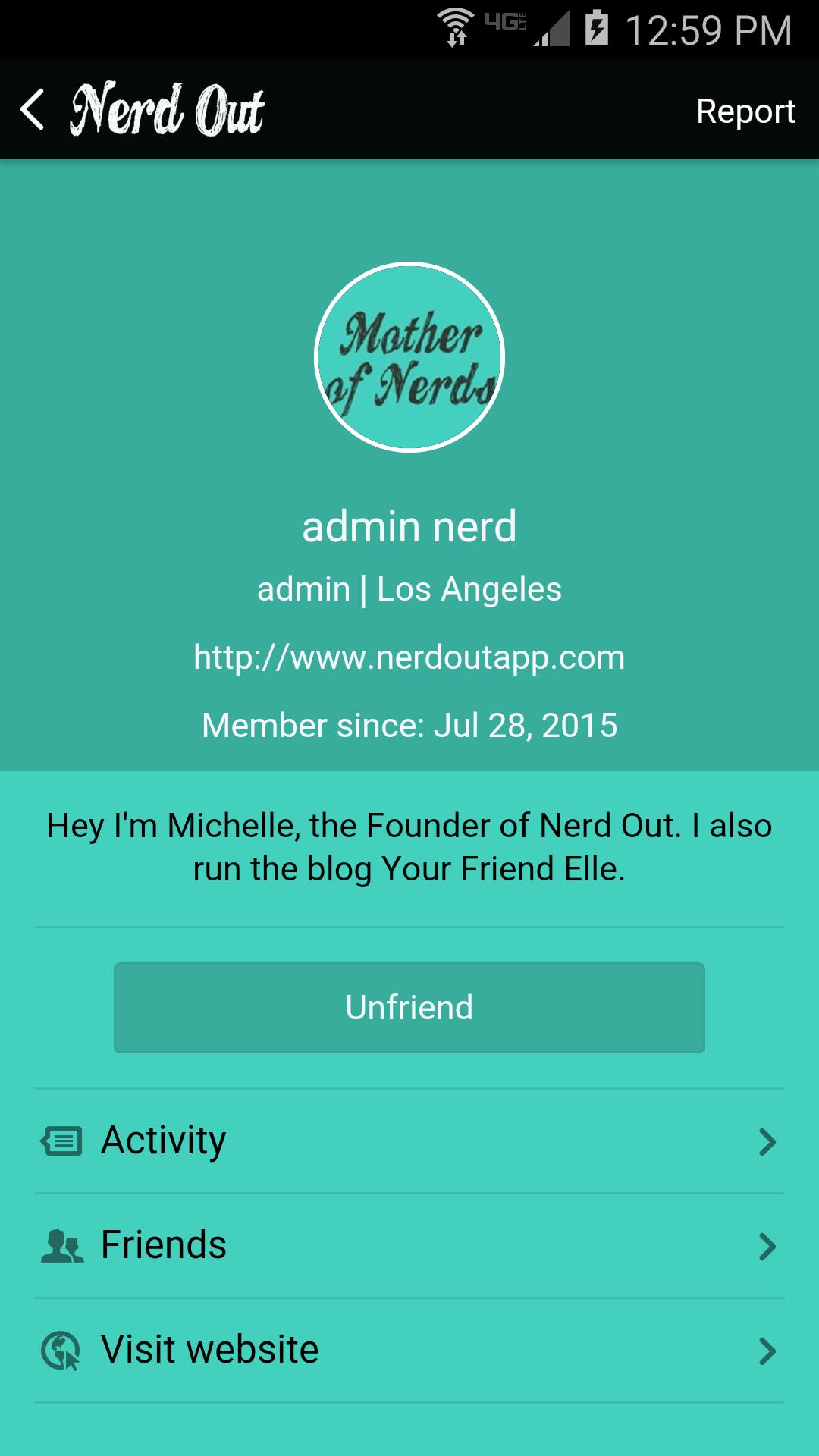 The wall is where all of these posts live, so looking through it you might be able to find what your friend’s comments are linked to. You can look through the wall without signing up for an account, but you can’t like, comment, or friend others without one. The wall can be sorted to show just your friends’ posts or everyone’s. Jensen wanted to include this social media-like option in the app to give people an extra way to talk to each other and connect.

The wall doesn’t appear to be an overly active type of community, but many of the posts have likes and comments and seem to be focused on actually connecting to others who live in the same area or who are also attending an event. It’s also nice to see Jensen joining in on the conversation through posting and leaving comments with the admin account. It makes it feel like a small community where you can connect with others without too much trouble. According to Jensen, the app passed 5,000 downloads as of June 10. This doesn’t mean everyone downloading necessarily creates an account though.

The sections of the app I mentioned seem the most useful and interesting to me, but there are more. There’s a section where you can check out specific venues, a FAQ, a place to see notifications, and easy access to the Nerd Out YouTube page and store. You can also submit an event and request a location to be added through the app, two things you can also do on Nerd Out’s website. Through the website you can also become a part of a type of street team Jensen’s created called the Nerd Squad. The Nerd Squad are volunteers who spread the word about the app in their cities and at events. According to Jensen, the now includes more than 30 people around the world.

Overall I enjoyed using the Android version of the app more than the one on my iPad, mostly due to the occasional main menu issue. One thing I liked a lot about the app was how easy it was to see what’s happening in my area. That leads, however, to the big downside of the app. If you’re located in a state or city not listed, the app might not be very useful to you.

That being said, Nerd Out’s small team is working to expand. Jensen said that when she receives requests to add new places, she’ll look at her list and see what was requested the most. From there she’ll put locations out for a public vote and then add some of them.

“We do it kind of by group request. If I have one request for one location but I have 25 for another location of course I’m going to add the one with 25,” she said.

Final count for the vote! #Minnesota, #Pennsylvania, & #Louisiana will be added over the next few weeks! #NerdOutApp pic.twitter.com/LurJsaU1jG

My favorite thing about the app was the variety of events it included. There are all types of things listed in the app and Jensen said they “try to have a very wide umbrella” so if someone “doesn’t want to go to comic con they still have something to do.”

Jensen sees this range of events included in the app as its strength. “You don’t have to wait for the big events like New York City Comic Con or San Diego Comic-Con. You can live out your nerdy stuff any day of the week.”

Not only is the variety nice to see, but it’s also good to know that Nerd Out doesn’t just accept any old event either. They verify events in an attempt to make sure they’re safe for people to attend.

“I can’t run a background check on everybody in the world, but we try to make sure it’s a legitimate place, that maybe they have had it for a few years running, and we’ll look at that. I’ve had people submit stuff that is at their house and I’m like ‘sorry, it has to be a public place.’ I want the security of a public area…” she said. “It’s important to me because I would never want to send one of my friends or anything like that to some unknown location.” 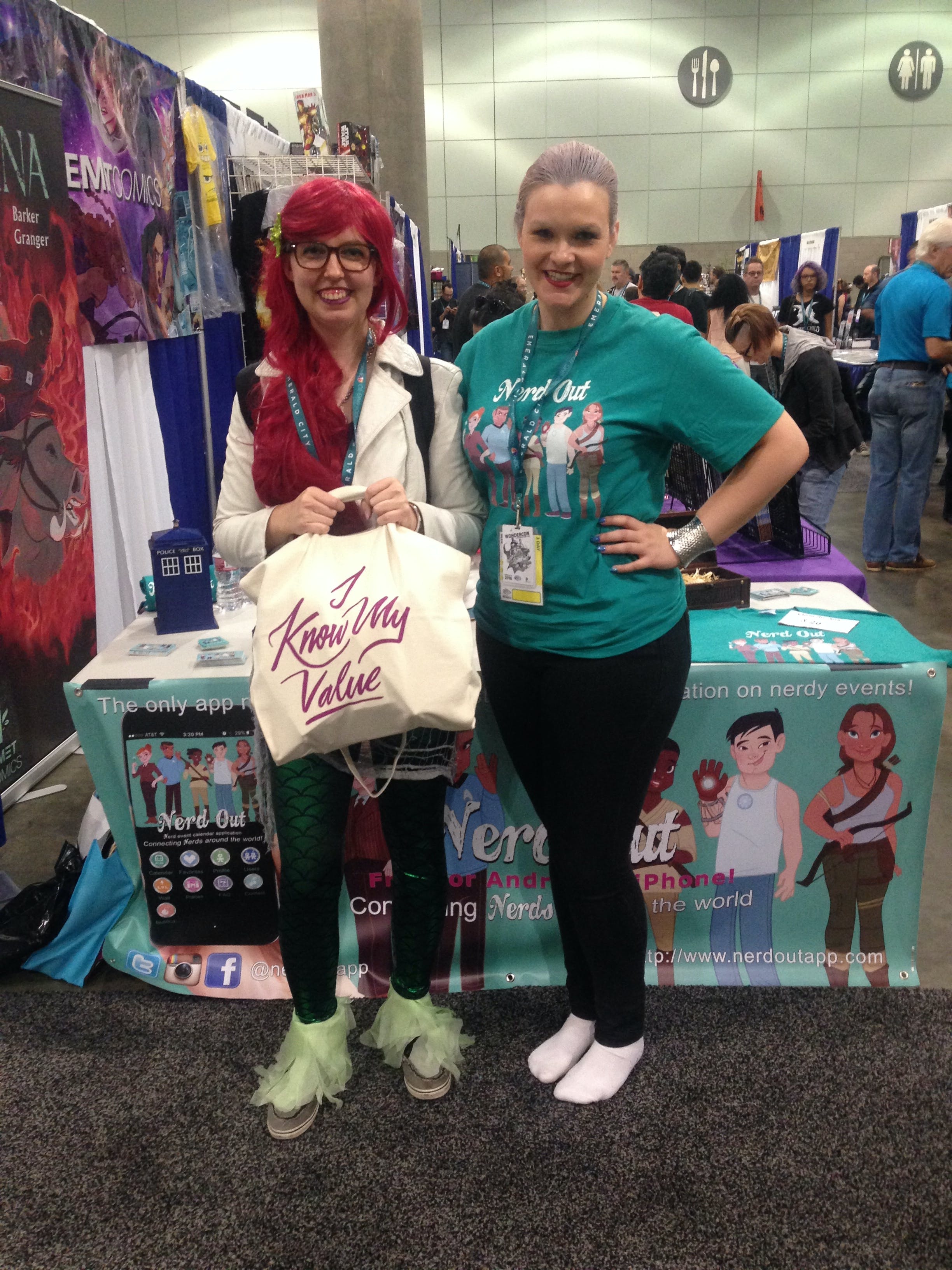 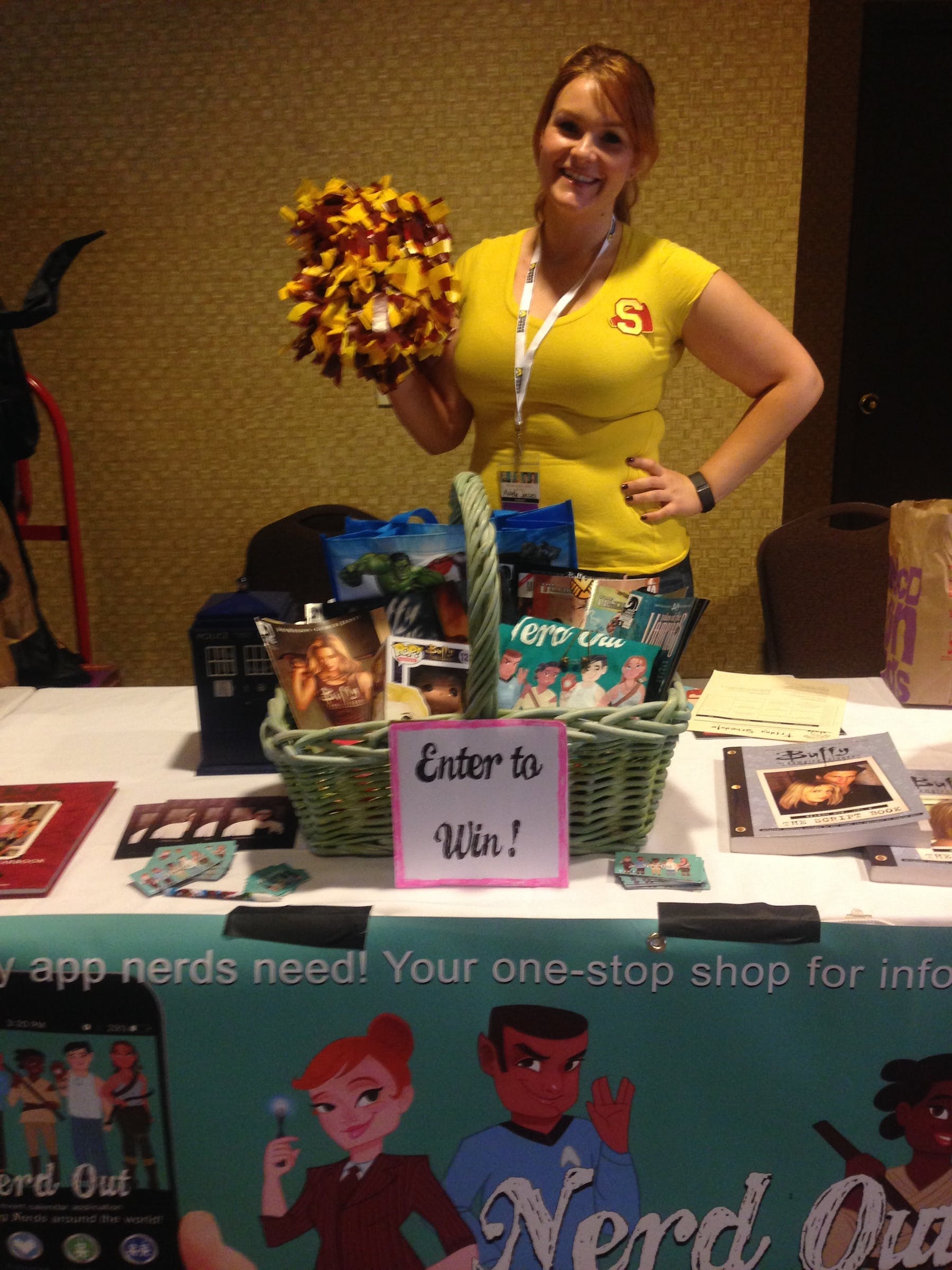 It looks like Nerd Out has a promising future. Jensen said she is working on generation two of the app, which will have more locations and features, though she didn’t want to reveal them yet. The team is also working on a five-minute daily podcast that will focus on events in different states each day.

If Nerd Out can continue to add more locations, keep up its variety of events, and fix the few technical issues I discovered, it will be a valuable resources for anyone who likes to attend nerdy events and wants to connect with fellow geeks.