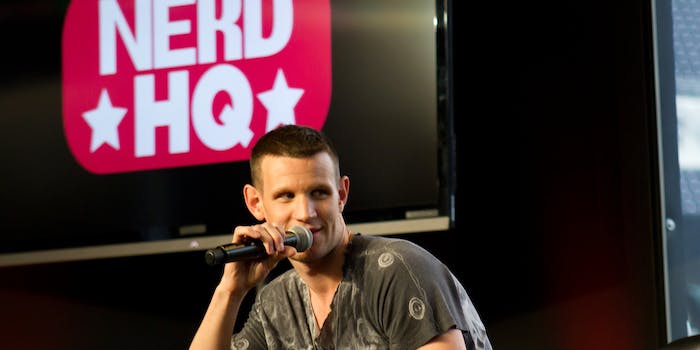 Fans love Nerd HQ, but will they fork over $1 million?

In the three years since its first appearance at San Diego Comic-Con, Nerd HQ has become a comic convention fixture.

Headed up by actor Zachary Levi (Chuck), Nerd HQ is the real-world offshoot of geek culture site The Nerd Machine. It’s doesn’t actually take place at SDCC, but provides a kind of mini-con-outside-the-con event space nearby, with a more intimate atmosphere where fans can interact with actors from shows like Firefly, Doctor Who, Teen Wolf, and Supernatural without being crushed by the zillions of people flooding the bigger halls at Comic Con.

Now, Nerd HQ is crowdfunding for its events in San Diego this year, which will apparently require $1 million.

This is a lot of money, but Nerd HQ is pretty damn popular. It’s known for organizing more relaxed panel interviews than the official con, with past successes including the hour-long Tom Hiddleston Q&A where he ended up doing velociraptor impressions for the crowd, and the Hannibal panel where Hugh Dancy and showrunner Bryan Fuller found themselves wearing flower crowns. Thanks to hosting far smaller audiences than the official Comic Con panels for big media franchises like the Avengers movies, Nerd HQ allows geek culture icons to speak with their fans on a more equal footing, and with fewer PR guidelines to follow. It’s also very popular among fans who aren’t in San Diego, because most of the panels are either streamed online or uploaded to YouTube afterwards.

It’s no big surprise that this Indiegogo campaign has raised more than $180,000 with a month left to go. The huge price tag does raise a few questions, though.

Donating to the campaign doesn’t actually get you anything except the continuing existence of Nerd HQ. As in, even the top pledge level of $1,000 only offers you a place of honor on the Nerd Machine website and some exclusive online content, rather than any kind of real-world access to Nerd HQ events.

This is certainly atypical for a crowdfunding campaign of this magnitude, although Zachary Levi makes it clear in the campaign video that he’s really only expecting $5 per person, which funds a service that is then freely available to everyone. Putting it that way, it seems more like a subscription charge than anything else.

The main thing this makes us wonder is why SDCC itself doesn’t just wise up and arrange some kind of partnership with Nerd HQ. It seems crazy that Nerd HQ’s previous sponsors were so unreliable, considering the popularity of the events. The good news is that Levi makes it clear on the Indiegogo page that even if they don’t raise the full million, Nerd HQ will hopefully still go ahead as planned, either scaled back or with new sponsors.

The Indiegogo campaign is open until April 25, at which point we’ll find out whether people think it’s actually worth paying for the 25 hours of super-popular content Nerd HQ uploads each year. $180,000 is a promising start, but with no serious crowdfunding perks, the other $820,000 may be a harder sell.