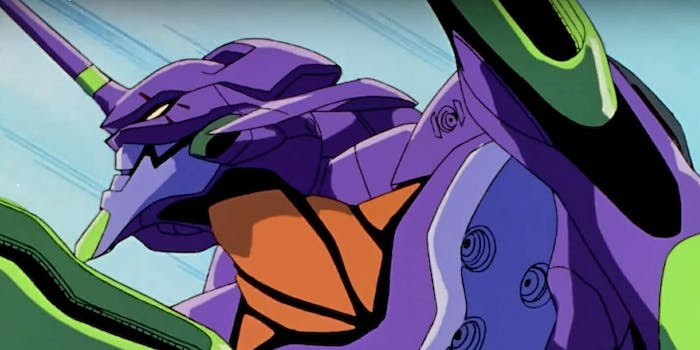 It's time to reignite all those mid-2000s arguments about whether 'Evangelion' is good or not.

Evangelion is coming to Netflix in 2019, and anime fandom is predictably freaking out.

Neon Genesis Evangelion is an epic mecha anime that aired in Japan the mid-1990s. It’s an apocalyptic sci-fi story about a teenage boy who pilots a giant mech suit into battle against alien invaders. Celebrated for its complex emotional themes, it had a major impact on Japanese pop culture in the years after its release. It also gained a massive following overseas, despite only being available via home release and pirate downloads.

This will be the first time it’s available to stream legally online in the U.S.

For a generation of anime fans, Evangelion was the show of their childhood or teen years. Well, this and Naruto. The Netflix release will lead to an influx of nostalgic rewatching—and, we predict, a rehash of the old “Is Evangelion actually good?” debate. Basically, while the show is iconic and widely beloved, it’s also an endless source of fandom debate because it’s kind of patchy, and the ending was very divisive. This anime podcast host summarized the situation pretty neatly:

I saw it as a depressed 13 year old, which was the ideal set of conditions. Under those circumstances, yes.

While Netflix has leaned into anime in the past few years, greenlighting several original series like Devilman Crybaby and Aggretsuko, Evangelion is the biggest deal to date. Whatever your feelings on its overall quality, this show is super popular. Its Western fandom was also shaped by the show’s inaccessibility, because to a certain extent, it required actual effort to watch. Back in the early 2000s, those pirate downloads were slow. So we predict a certain amount of snobbery from the early adopters who watched it the first time round, versus new viewers who can just casually marathon it on Netflix.

Along with the nostalgia factor, the whole piracy situation gives people another reason to rewatch next year. When the show first arrived in the U.S., some of the early versions were less than ideal, relying on fanmade translations or with low image quality. A Netflix release means professional translations and crisp visuals.

The Netflix release will include all 26 episodes of the original 1995 anime series, along with the films The End of Evangelion and Evangelion: Death (True) 2. We don’t have an exact release date yet, but Netflix says they’ll arrive in Spring 2019.