At some point during the winter, feeling smothered by grey weather, the sudden loss of a pretty good job, and the noxious climate on Twitter, I deleted the Twitter app from my phone and started collecting virtual cats. Neko Atsume, a.k.a. Kitty Collector, is a game you play by putting out food and toys for adorable kitties, and then … actually, there’s no “and then.” That’s the whole game. It’s clever and intensely therapeutic.

The object of Neko Atsume (to the extent that there is one) is to feed and entertain each of the 40 or so cats that happen to wander into your virtual yard. In return, the cats will leave you fish, a currency that lets you buy more food or toys. If a cat visits often enough, they’ll drop off their “memento,” a token of friendship.

Neko Atsume, a product of Japan, isn’t addictive in the same sense as many American mobile games. It doesn’t use consumer psychology or the heavy lever of guilt to make you invest ever more time and money.

There’s no “ego depletion” or “fun pain.”  In fact, there’s no pain of any kind. The cute kitties are not some kind of FarmVille-esque trap, luring you in with sporadic bursts of dopamine until they take over your life.

The game is blessedly free of the annoying “microtransactions” that plague many of the games in today’s broken App Store economy. You can buy more fish for real money, but there’s no incentive to do so. Neko Atsume never pushes you to amass new toys, and it takes very little time or effort to save up for any toy you might want from the shop. 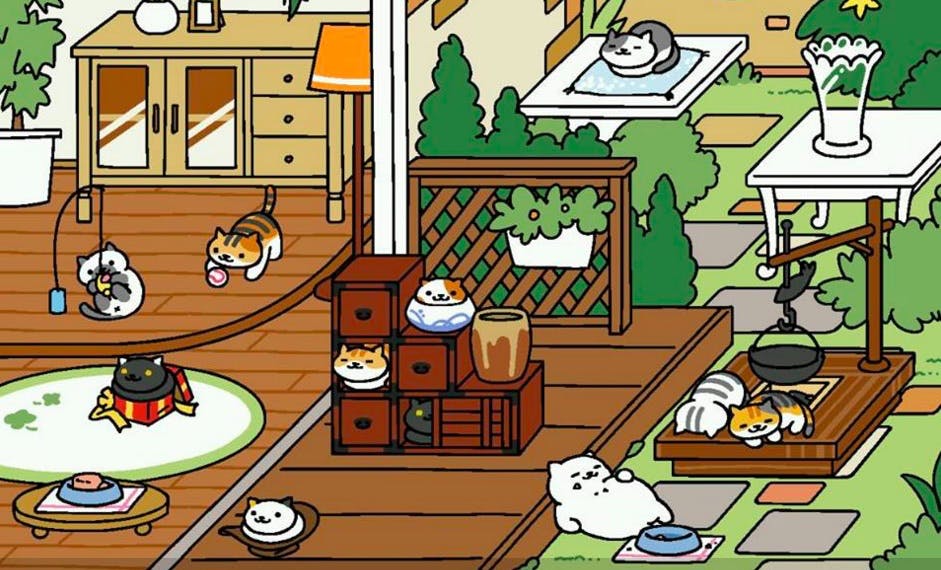 It’s also impossible to run out of food. The basic unit of kibble, a can of Thrifty Bits, is always available and costs nothing. Some of the pickier cats don’t love it, but they can deal.

If I had to compare Neko Atsume to another Japanese gaming innovation, I’d say it targets the same impulse to catalog and collect that brought us Pokémon, but without any of the action or urgency. Instead of “gotta catch ’em all,” it’s “catch them all, someday, if you feel like it.”

Neko Atsume is not a responsibility to add to the mounting pile of other duties, chores, and concerns in your life. It is not something with which you must “keep up.”

If you are wondering why I would make a direct comparison between Twitter and an app where I sporadically feed cats, this is the answer: Twitter had become a looming source of anxiety, a psychological experiment, a little jolt of dread with every new mention. The game of Twitter was: What have I fucked up this time?

Neko Atsume is the anti-Twitter. “Playing” the game largely consists of passive observation. Cats come and go, sitting on mats or batting around balls and teaser toys, and you can watch them … or not. They don’t care.

Unlike many games—ahem, Animal Crossing—Kitty Collector doesn’t impose a penalty for taking a break, or systematically shame you for failing to check in. You’re not God or the mayor of a metropolis. You’re just someone with a small, tidy house and garden. The stakes are low, the potential for failure nonexistent. You are Doing Fine. 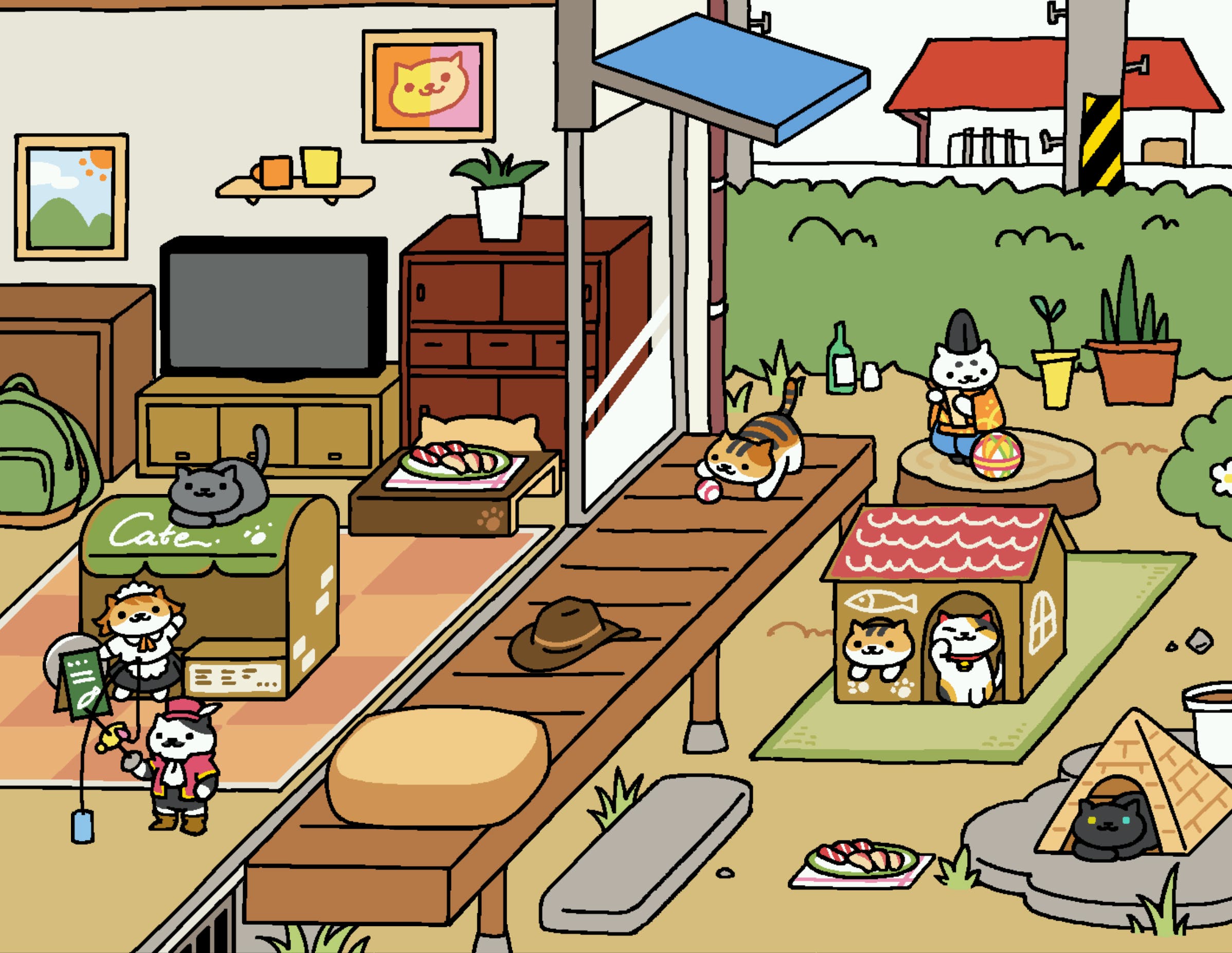 It’s also not a Tamagotchi for the iPhone age, whining and pooping until it expires from neglect or runs out of batteries. Your cats can’t die. They won’t miss you. They’re only visiting your yard, after all. If you fail to refill the food dish, they just won’t show up. Presumably, they’re getting fat and happy somewhere else. (Especially Tubbs, that glorious, rotund glutton.)

Neko Atsume is peaceful and sleepy. You can remodel your house into a zen garden. You can decorate it with nothing but fancy, food-shaped pillows, and watch your cats take naps. If you’re so inclined, you can save pictures of the cats to their tiny, virtual photo albums. The game’s encouragement is constant and gentle, and the challenge is whatever you decide it is.

“Aside in the rice and goods /
a cat who have gathered in the garden / it is healed nothing but watching /
Basically, it is such app.” – Neko Atsume official website

Internet strategy guides exist, listing the toys that correspond to each rare cat—a sphinx, a baseball cat, a cute li’l train conductor based on Japan’s famous Tama—but you don’t really need them.

The most competitive way you can possibly play Neko Atsume is by aggressively pursuing mementos, exclusively putting out the favorite toys of the cats who haven’t coughed up their special gifts yet (shoutout to Peaches, the ficklest of cats).

Now that I’ve collected most of the mementos, amassed a large supply of fancy cat food, and purchased nearly everything in the shop, I’ve taken to letting the game randomize the toys in my yard. I check in on the cats during coffee breaks, before bed, or when I just need to chill out and calm down for a minute. Sometimes I’ll arrange my little house according to a theme—all cushions,  just pots and buckets, brightly-colored toys only. It’s the iPhone equivalent of combing the sand in a tiny desktop zen garden.

Of course, one cannot retreat from society and watch fake cats forever. I’m not making a case for abdicating life’s many other joys and obligations—in fact Neko Atsume’s minimal time commitment is a big selling point. But as you make your way through the Internet’s daily onslaught of bad opinions, good jokes, hot takes, and bilious harassment, having a brief escape within arm’s reach can do wonders for your mood.

And that’s Neko Atsume—Kitty Collector. I give it five stars out of five. Recommended if you like: a hot cup of tea, a walk in the park, cozy sweaters, a soft pillow, and not giving a fuck for a change.