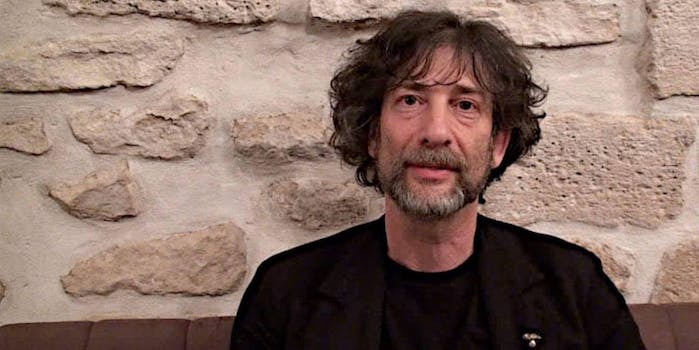 This sounds like an ideal project for the author of 'American Gods.'

Neil Gaiman‘s next book is all about Norse mythology.

Announced in the New York Times, Gaiman’s upcoming book is simply titled “Norse Mythology,” and will come out in February 2017. He will retell the familiar tales of the Asgardian gods and their adventures in the nine worlds of the Norse myths.

On Twitter, Gaiman said that he’d been working on the book for three years and finished it last month. Yet more proof that he’s one of the busiest authors in the world. Between publishing at least one book each year, raising a new baby, and contributing to all the TV, radio, and movie adaptations of his books, where does he find the time?

A tiny detail from the cover of The Mystery Project.
Tomorrow everyone will know what it is.
For now, still secret. pic.twitter.com/zvmY5AZ2EO

In a statement from his publisher, Gaiman said, “I hope the scholarship is good, but much more than that, I hope that I have retold stories that read like the real thing: sometimes profound, sometimes funny, sometimes heroic, sometimes dark, and always inevitable.”

This sounds like an ideal project for Gaiman, whose work often draws inspiration from mythology and folklore. American Gods, which is being adapted for TV, features Norse gods in present-day America, and his children’s novel Odd and the Frost Giants included Loki, Odin, and Thor. And, of course, his iconic Sandman series is littered with mythological references from around the world.