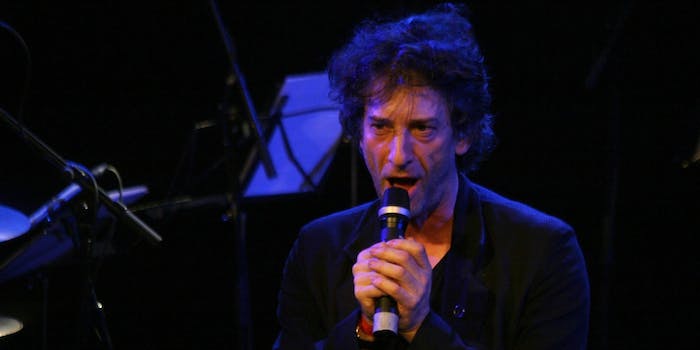 Shockingly, some people are objecting to the DC Comics adaptation Lucifer depicting Satan as a suave Los Angeles nightclub owner.

One Million Moms, the conservative Christian group known for doing things like trying to get Ellen DeGeneres fired for being gay, criticized Lucifer on the grounds that it “mocks the Bible” and “mischaracterizes Satan.”

They organized a petition for the show to be dropped before it airs on Fox, pointing out that the pilot episode includes “graphic acts of violence, a nightclub featuring scantily-clad women and a demon.” Presumably they also disapprove of every other adult drama on TV, most of which include at least two of those three things.

Neil Gaiman, who introduced the DC Comics interpretation of Lucifer in Sandman, responded to the petition on Tumblr:

“Ah. It seems like only yesterday (but it was 1991) that the “Concerned Mothers of America” announced that they were boycotting SANDMAN because it contained Lesbian, Gay, Bi and Trans characters. It was Wanda that upset them most: the idea of a Trans Woman in a comic book… They told us they were organising a boycott of SANDMAN, which they would only stop if we wrote to the American Family Association and promised to reform.

I wonder if they noticed it didn’t work last time, either…”

More than 12,600 “concerned moms” have signed the petition so far, and Fox will almost certainly ignore all of them. Unless a TV show includes something so inappropriate and shocking that it would cause a massive public outcry, the only thing TV networks care about is ratings and advertising revenue.

Since Lucifer is hardly the first modern fantasy show to rely on Biblical themes (Supernatural, Buffy, Constantine, Dominion…), we doubt this petition will make any difference whatsoever.