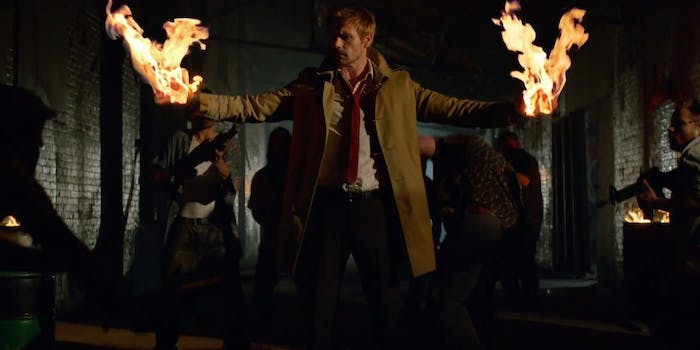 Ignore the low-budget effects and check out how perfect Matt Ryan looks.

Unavoidably, NBC’s Constantine will be judged by how it measures up to the 2005 Keanu Reeves movie. That and Supernatural, a show with which it shares many similarities including an obsession with Judeo-Christian demonology, and John Constantine and Castiel’s identical trenchcoat-and-tie outfits.

The good news is, the trailer for the new Constantine series looks nothing like the movie, and in all the right ways. On its own, the Keanu Reeves movie was an urban fantasy blockbuster that received mixed reviews. As an adaptation of DC Vertigo’s long-running Hellblazer comics, it was a disaster. The main characters were stripped of their defining traits, and John Constantine was given a bombastic, heroic storyline that seemed at odds with the usually downbeat tone of the comics.

NBC’s Constantine isn’t a direct adaptation of a specific Hellblazer story arc, but all the right elements seem to be in play. Matt Ryan looks so perfect for the role that he may as well be a cosplayer, the trailer opens with a formative moment from Constantine’s backstory, and while the show appears to take place in America, Constantine speaks with a convincing Liverpool accent.

So, Hellblazer fans will surely be happy to see that this version at least cleaves close to comics canon. The question is, will it actually be good? From the trailer, it’s kind of hard to tell. As with Gotham’s trailer, they’ve clearly made an effort to cram in as much familiar material as possible, strung together with a few rather cheesy one-liners. And as with Gotham, it’s unfair to judge the show on its first trailer alone.

However, the most noticeable flaw is how low-budget it looks. Harold Perrineau’s angel character seems to be wearing Alan Rickman’s prosthetic wings from Dogma, and when Constantine shoots flames out of his hands, it looks like one of Will Arnett’s Arrested Development magic tricks. The CGI, when it happens, is about at Supernatural’s standards, and that’s saying something.

An optimistic explanation is that all of this footage probably came from the pilot episode. Hopefully now the show has been picked up for a full season, its budget will increase. Otherwise, we’re looking at a show with similar visual effects to early Buffy the Vampire Slayer, but possibly without the snappy dialogue to back it up.