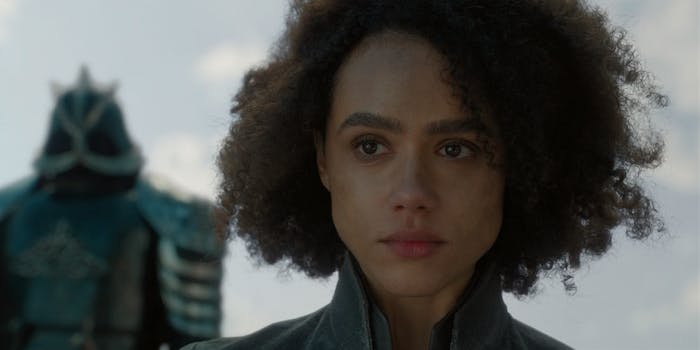 This article contains spoilers for the latest Game of Thrones episode, “The Last of the Starks.”

Games of Thrones‘ Nathalie Emmanuel said goodbye to the beloved Missandei of Naath on Tuesday, stating that the character “represented so much for me, personally, that I have no choice but to carry the things she has taught me into my life going forward.”

Emmanuel played Missandei, a former slave who became Daenerys’ trusted advisor, for seven years. On Sunday’s episode, she was captured by Euron Greyjoy’s army and brought to Cersei as motivation for Daenerys to bend the knee. Her death by beheading was shocking and frustrating to many fans.

Emmanuel didn’t directly address criticism about her character being killing off, especially as the lone woman of color on the series, but she did acknowledge that the episode was “pretty intense for some of you” and that she likes to think Missandei is on a beach somewhere. She also thanked co-stars Emilia Clarke and Jacob Anderson (Grey Worm) and added that the “Bad Ass Boss Lady Warrior Goddess club will live on forever.”

Anderson also posted a video from “somewhere in the multiverse,” showing him and Emmanuel dancing in character to “My Boo” by Ghost Town DJs.