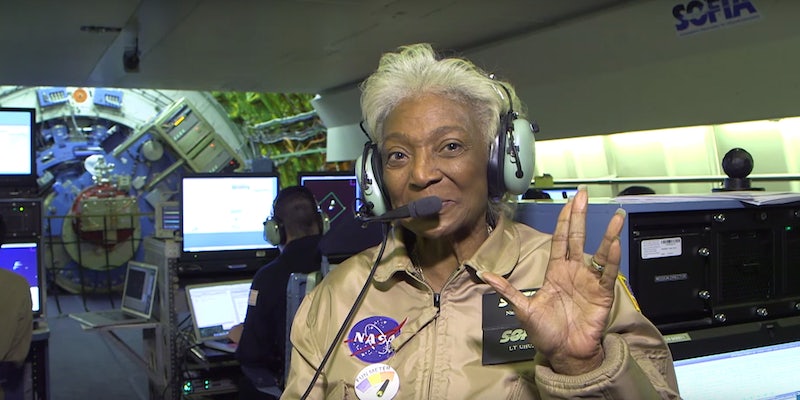 By the 23rd century, the world that Star Trek inhibited was one of peace and exploration that was centuries in the making, but it ended up inspiring the astronauts and scientists who may help one day to make Stark Trek a reality.

In honor of Star Trek’s 50th anniversary, space agencies and those who work for them are paying homage to the show that showed exploring the Final Frontier was possible.

From all of us at NASA, we wish the entire Star Trek family a happy #StarTrek50! Thanks for the inspiration! pic.twitter.com/VUl4VefWuM

Honoring #StarTrek50 today. 'cause if we want to build the future, we first need to have the boldness to imagine it! https://t.co/GWkfNgaOjr

Thanks @StarTrek for the inspiration & possibilities. I hope @NASA & around the world we're building the future you envisioned. #StarTrek50

It's written in the stars… or a star forming region. For #StarTrek50, we present the 'Enterprise' Nebulae. pic.twitter.com/Bd4IbVfgep

#TBT We hosted the Star Trek crew in 1976 for the rollout of Space Shuttle Enterprise. #StarTrek50 pic.twitter.com/20vDzlMsKf

To mark the occasion, NASA replaced the International Space Station icon with the U.S.S. Enterprise as Mission Control tracks its location around the globe.

In honor of #StarTrek50, an Enterprise icon is used to show where station is on the world map in Mission Control! pic.twitter.com/HF6H6rM3nm

NASA and Star Trek have been intricately linked since the latter’s inception, and the cast is still astounded with what has been accomplished in space exploration.

“All these imaginative exercises in science fiction is merely food for the imagination of scientists who are actually working with technology that is,” William Shatner said.

The space agency particularly credits Nichelle Nichols and George Takei for helping recruit and inspire people of color to join at a time when their roles on TV weren’t just a rare multi-dimensional role but were vital. Nichols, in particular, recalled Dr. Martin Luther King Jr. telling her she couldn’t quit Star Trek because she had become a symbol; she not only inspired other astronauts like Mae Jemison but an entire generation of actresses.

In celebration of #StarTrek50, our administrator on the real world impact of fictional characters Uhura and Sulu. pic.twitter.com/IFuUN5vrZQ

Star Trek was a story of incredible wonder and scientific marvel, but it wasn’t the only thing the show made them strive for.

“For me, it wasn’t only a vision of the diversity of worlds and life that might be out there that drew me in,” Aki Roberge, an astrophysicist at NASA’s Goddard Space Flight Center, said. “It was also Star Trek’s vision of how humanity itself is changed by the exploration of space and then by meeting others who are genuinely, fundamentally different from ourselves. The Star Trek vision is a very optimistic, sunny vision of humanity at peace with itself, and with a greater appreciation for—and a greater value placed on—personal development and satisfaction in your work.”