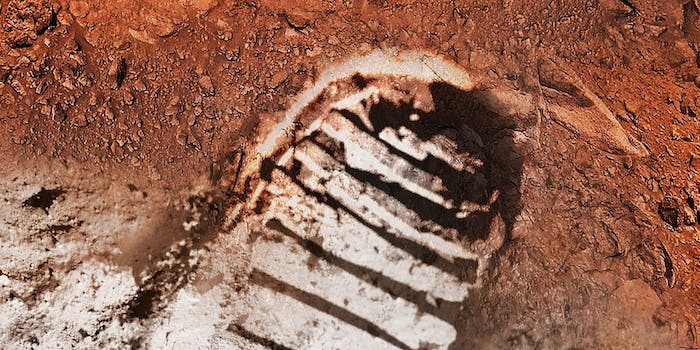 “The next generation is out in that audience."

When you think of San Diego Comic-Con, you’re probably more like to think of Star Trek’s USS Enterprise than NASA’s Apollo 11, but all of that might be about to change. This year NASA held its first Comic-Con panel just in time for the 45th anniversary of the moon landing. The panel, titled “NASA”s Next Giant Leap,” featured astronaut and second man to walk on the moon Buzz Aldrin, NASA planetary division director Jim Green, astronaut Mike Fincke, and jet propulsion laboratory systems engineer Bobak Ferdowsi as panelists.

The event filled a room with more than 1,000 people and left many more who had lined up unable to enter, clearly showing the enthusiasm at the convention for NASA’s presence. But why host a panel at Comic-Con at all? Green told the Daily Dot it’s the exciting nature of the venue and it’s appreciation for imagination that makes it a great fit for NASA.

“It’s a place I think we can now see ourselves from a NASA perspective going and having science fiction meet science fact. Science fiction has a pull for us. The kind of things we need to survive in the future are touched on in science fiction and it allows us to think in that manner,” Green said.

Green pointed out how the communicator Captain Kirk used to use is like today’s cell phone, only our phones are actually far superior. Even the Dawn spacecraft with its ion engines is similar to how ships in Star Trek and other science fiction propelled themselves through space.

“We’ve started down the path that science fiction has already gone down and it allows us to think out of the box about how ‘yes those are the kinds of things we need’ and begin to think in that manner. Comic-Con’s the perfect venue,” he explained.

Green knew they hit a home run with the panel when he saw the packed room, and was reminded afterward when he left and saw the crowd that couldn’t get inside. It was the attention NASA had hoped for and the perfect opportunity to tell the public what it was doing. According to Green, it’s a way to give back, since the public is paying for what they do in the first place. The panel highlighted the current work and future missions NASA has planned, including its goal to reach Mars.

Right now Green said NASA is in the process of learning everything it can about Mars before sending humans to the planet. The organization is doing this first with robots, which includes, as announced Thursday, sending new instruments on a rover in 2020 that will allow the team to explore the planet like never before. The progress being made means we will have the ability to visit Mars in our lifetime, according to Green. These trips to Mars will likely follow the steps we’ve taken to visiting the moon, with missions first flying around it and coming back before finally touching down on the surface.

The fact that we may achieve this in our lifetime is another reason NASA hopes to continue making appearances at Comic-Con. The convention is rapidly growing, with families and children increasingly attending, and to Green that means the future of the space program might be out there in the crowd.

“The next generation is out in that audience. At Comic-Con might be the young kid that will be the first person to step on Mars. We can start them on that journey with our panel… the inspiration that NASA brings can’t be underestimated,” he said.

If asked, Green said he’d return to Comic-Con in a heartbeat. Next time though, he’d like a bigger room.

You can watch the full panel below.