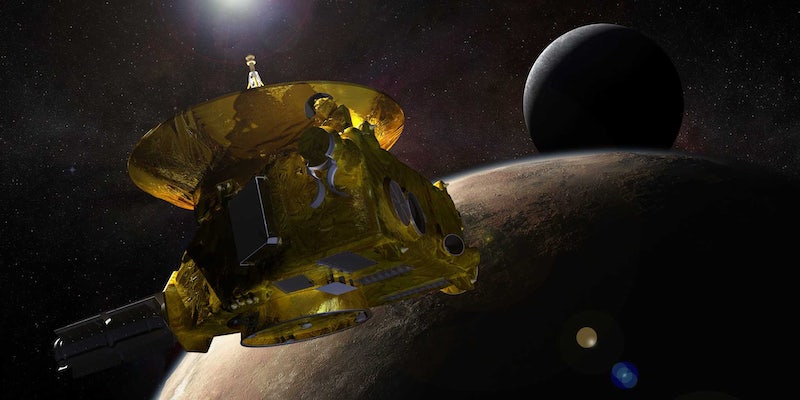 The probe already sent back a stunning image from just before the close flyby.

NASA‘s New Horizons probe completed its nine-year journey to the dwarf planet Pluto on Tuesday morning, capping off a journey to what was once considered our solar system’s last planet and setting the stage for a flood of new data about the mysterious and distant world.

New Horizons blasted off from Earth in January 2006 to gather data about Pluto, its five moons, and other large objects in the Kuiper Belt. The probe reached its closest point to Pluto at 7:49am ET Tuesday, and it will now continue to speed through the outer reaches of the solar system indefinitely.

Beginning the #Pluto occultation measurements to get our best look at the atmosphere. #PlutoFlyby

New Horizons has given us the most conclusive images of Pluto ever seen, beginning with blurry photos earlier this year and culminating in gorgeous high-resolution pictures this week.

Because the probe cannot take and transmit photos at the same time, its first close-flyby images will not reach NASA until Wednesday afternoon. But NASA has already posted another beautifully detailed image taken just before the historic flyby.

Gorgeous Pluto! The dwarf planet has sent a love note back to Earth via our New Horizons spacecraft, which has traveled more than 9 years and 3+ billion miles. This is the last and most detailed image of Pluto sent to Earth before the moment of closest approach, which was at 7:49 a.m. EDT Tuesday – about 7,750 miles above the surface — roughly the same distance from New York to Mumbai, India – making it the first-ever space mission to explore a world so far from Earth. This stunning image of the dwarf planet was captured from New Horizons at about 4 p.m. EDT on July 13, about 16 hours before the moment of closest approach. The spacecraft was 476,000 miles (766,000 kilometers) from the surface. Images from closest approach are expected to be released on Wednesday, July 15. Image Credit: NASA/JHUAPL/SwRI #nasa #pluto #plutoflyby #newhorizons#solarsystem #nasabeyond #science

Thanks to the difficulty of transmission and the 4.5-hour time delay between Pluto and Earth, we won’t know the probe’s true status until Wednesday. But for the time being, there is no reason to believe the mission was not successful. Over the coming weeks, New Horizons will continue to transmit photos and other data about Pluto and its moons.

It has been 46 years since Neil Armstrong set foot on the Moon and just 112 years since the Wright brothers flew their first functioning aircraft. As of this week, an Earth probe has visited each of what were once considered the nine planets of the solar system; the fact that one of them was downgraded to dwarf-planet status has not dampened NASA’s excitement at the prospect of analyzing it in what promises to be stunning detail.