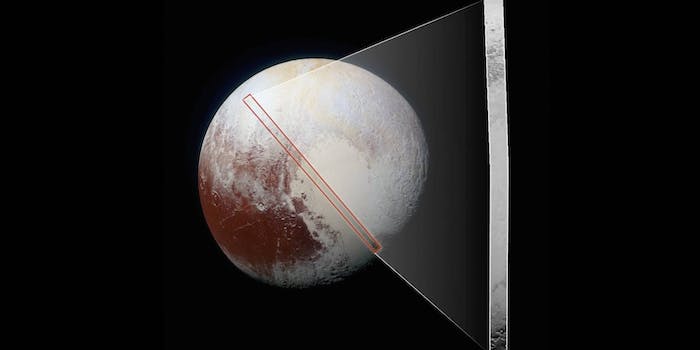 We're getting a closer look at everyone's favorite dwarf planet.

NASA has released footage from its New Horizons spacecraft, giving folks on Earth a glimpse at Pluto‘s surface.

Compiled from a series of highest-resolution images taken on July 14, 2015, the video provides perhaps the clearest look at the distant dwarf planet we may see in our lifetimes. It’s a substantial glimpse taken from multiple perspectives and spanning well over 45 miles.

The lengthy nitrogen ice plains and hummocky pockets of uplands denote an unforgiving climate that has helped shape Pluto’s surface substantially. New Horizons has provided NASA with even more information about Pluto and only strengthened scientists’ resolve to continue delving into such a fascinating landscape.

“This new image product is just magnetic. It makes me want to go back on another mission to Pluto and get high-resolution images like these across the entire surface,” New Horizons’ principal investigator Alan Stern tells NASA.

More images will certainly take some time to get back down to Earth. New Horizons launched a decade ago and was only able to begin its Pluto reconnaissance mission in the summer of 2015. At its closest to Pluto, New Horizons was still 7,800 miles away from the surface.