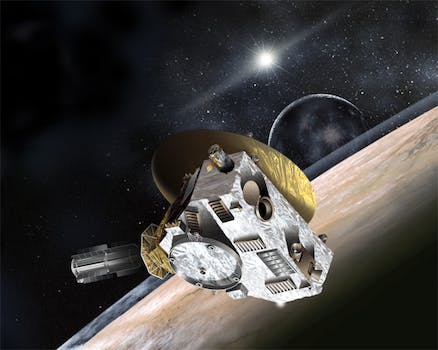 Who knows what scientists will find when it arrives?

When NASA‘s New Horizons probe launched in January 2006, it was heading toward a celestial body that astrophysicists still called a “planet.”

Scientists now call Pluto a “dwarf planet,” but their expectations for scientific discovery when the probe arrives at Pluto in July 2015 are by no means diminished.

As it began its approach to Pluto, New Horizons “woke up” from a power-saving sleep mode, telling NASA on Sunday evening that it was up and ready to go. The probe is now so far away that the radio signal, traveling at light speed, took four and a half hours to reach Earth.

As the probe awoke from its slumber 2.9 billion miles away, it received a serenade from tenor Russell Watson. The song in question was “Where My Heart Will Take Me,” which Watson recorded as the theme music for Star Trek: Enterprise, and which has been used on several occasions as a “wakeup” song for astronauts on shuttle missions.

New Horizons’ close approach to and study of Pluto over the next seven months will likely focus new attention on the controversial decision to demote Pluto from planet to dwarf planet in September 2006, just a few months after the probe’s launch. At the time, the leader of the New Horizons mission remarked, “This definition stinks.”

New Horizons is now in an area of the solar system called the Kuiper belt, out beyond Neptune. This trans-Neptunian space includes Pluto, at least two other dwarf planets, and numerous asteroids.

On Jan. 15, New Horizons will be close enough to survey an asteroid with the rather unpoetic name of VNH0004. By February, it will be able to send back its first observations of Pluto. Its closest flyby of the dwarf planet will take place on July 14.