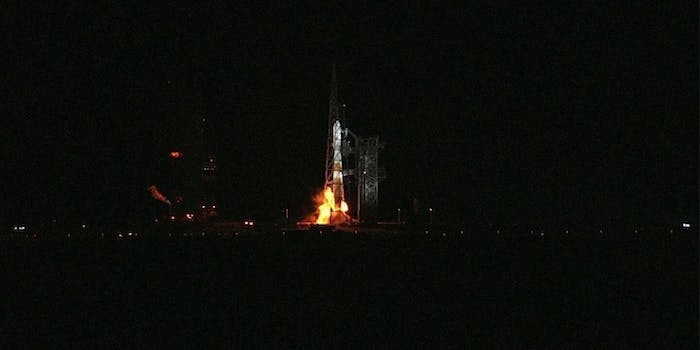 At about 3:30am ET on Sunday morning, the spacecraft that’s headed directly for the sun launched from Cape Canaveral, Florida. And the photos from the nighttime launch are spectacular.

As detailed by NASA, the Parker Solar Probe’s mission is to “touch” the sun by using gravity assists from Venus to get itself as close as possible to the Earth’s nearest star.

“It will fly directly through the Sun’s atmosphere, as close as 3.8 million miles from its surface, closer to the surface than any spacecraft before it,” NASA wrote. “The spacecraft will hurtle around the Sun at speeds up to 430,000 mph. That’s 15 times faster than a speeding bullet.”

Wait, so why is NASA doing this?

Parker Solar Probe will revolutionize our understanding of the Sun’s corona. Facing brutal heat and radiation, the spacecraft will fly close enough to watch the solar wind speed up from subsonic to supersonic, and fly through the birthplace of the highest-energy solar particles. Parker Solar Probe and its instruments will be protected from the Sun’s heat by a 4.5-inch-thick, carbon-carbon composite heat shield. The shield’s front surface will be able to withstand temperatures outside the spacecraft up to 2,500 degree Fahrenheit. While the inside, or back surface of the shield will withstand temperatures up to 650 degrees Fahrenheit.

For more than 60 years, scientist have wondered how energy and heat move through the solar corona and what accelerates the solar wind as well as solar energetic particles. Now, with the help of cutting-edge thermal technology that can protect the mission on its dangerous journey, the spacecraft’s four instrument suites will study magnetic fields, plasma and energetic particles, and image the solar wind.

See, it doesn’t have to be just the plot device of Airplane 2. Hurling a spacecraft to the sun can actually make sense.

Either way, the photos and videos of the launch were fantastic.

3-2-1… and we have liftoff of Parker #SolarProbe atop @ULAlaunch’s #DeltaIV Heavy rocket. Tune in as we broadcast our mission to “touch” the Sun: https://t.co/T3F4bqeATB pic.twitter.com/Ah4023Vfvn

While we wait for the main engine to start up again around T+23:19, here are some additional photos of the liftoff. #ParkerSolarProbe #DeltaIVHeavy pic.twitter.com/mYgYgvUevf

Hours before the rise of the very star it will study, our #ParkerSolarProbe spacecraft launched from @NASAKennedy at 3:31am ET to begin its journey to the Sun and uncover solar mysteries. Details: https://t.co/5O4r9xljva pic.twitter.com/JXerO4H86x

According to NASA, the mission to reach the sun’s atmosphere will take about seven years.