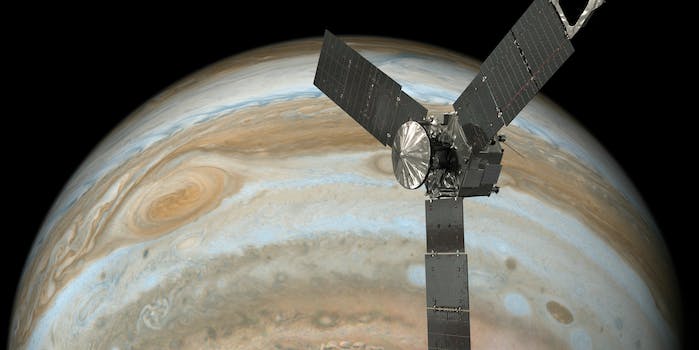 The spacecraft caught these photos 2,100 miles above Jupiter's tumultuous surface.

NASA spacecraft Juno swooped in for a close Jupiter flyby on Oct. 24 where it shot stunning photos of the planet. NASA released a big batch of the photos on Tuesday, exhibiting breathtaking shots of Jupiter’s swirling blue and white gases.

The Juno spacecraft zipped over the gas giant at 130,000 miles per hour from its south pole to the north one, a trip it will make every 53 days, snapping enhanced photos of the planet’s surface. The relay of the photos back to NASA’s Florida base was delayed by Jupiter passing the sun, which impacted communication channels.

Launched in 2011, this marks the spacecraft’s eighth flyby over the terrain of the mostly gaseous plant. Here is a sequential photo of Jupiter as Juno approached the planet in May.

Juno’s primary goal is to map Jupiter’s magnetic and gravity fields in addition to studying their properties in hopes of providing new insights into Jupiter’s formation and origin.

In July, the JunoCam captured a series of shots of Jupiter’s Great Red Spot, a roiling storm of red clouds NASA first discovered in 1830. Although the planet is not habitable, researchers hope more research can unveil secrets about its evolution.

In the meantime, people can follow the spacecraft in real time with NASA’s latest 3D simulation program called “Eyes on Juno” with glimpses into the spacecraft’s journey and get up-close peeks of the planet itself as Juno continues to orbit Jupiter. View the raw photos here.

Juno’s next flyby of Jupiter is set for Dec. 16.