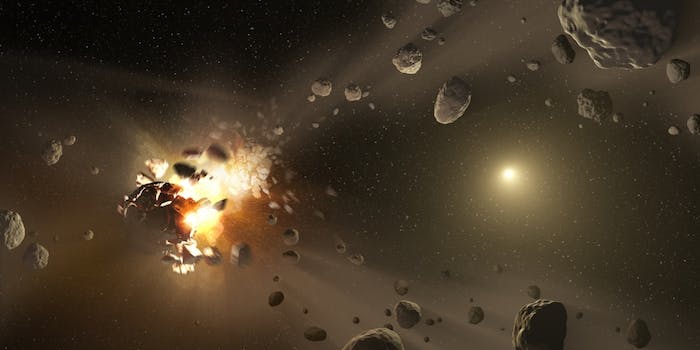 A two-mile-wide asteroid will not be wiping out the Earth in September, so you can cross that off your list of things to fear.

NASA‘s Asteroid Watch Twitter account, run by staff from its Near Earth Object Office, has been bombarded for months by questions from conspiracy theorists asking if the world will end in September, when a giant asteroid is rumored to collide with our planet.

After patiently responding to panicked Twitter users over the course of those months, NASA decided to go a step further and issue a press release officially declaring September a giant-asteroid-free month.

“There is no scientific basis — not one shred of evidence — that an asteroid or any other celestial object will impact Earth on those dates,” said Paul Chodas, manager of NASA’s Near-Earth Object office at the Jet Propulsion Laboratory in Pasadena, California.

In fact, NASA’s Near-Earth Object Observations Program says there have been no asteroids or comets observed that would impact Earth anytime in the foreseeable future.  All known Potentially Hazardous Asteroids have less than a 0.01% chance of impacting Earth in the next 100 years.

The latest rumor about a giant asteroid heading our way seems to have begun when Laurent Fabius, the French foreign minister, visited the United States. During a White House event on climate change, Fabius told Secretary of State John Kerry that the Earth’s governments had “500 days to avoid climate chaos.” Little did he know that rapture-ready listeners would quickly suss out that he was referring to an asteroid impact 500 days from that day, or late September 2015.

But the world isn’t ending any time soon. There is no asteroid on an imminent collision course with our pale blue dot. And the Asteroid Watch social-media team’s patience remains commendable.

@lisalisadanmike We've replied to you numerous times. Nothing has changed.

@langdoggydog It fluctuates, but usually 4 to 10 questions per day are sent to us regarding the September asteroid hoax.

NASA did not, however, specifically deny that an asteroid would hit the Earth in October.