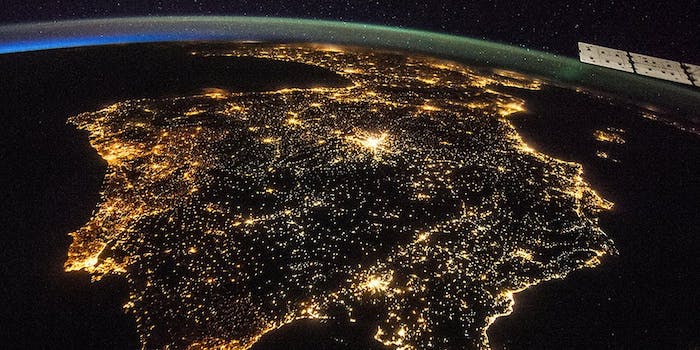 NASA needs your help to analyze photos of light pollution

Astronauts on the International Space Station zoom over the surface of the Earth at roughly 17,150 miles per hour, a blisteringly fast pace. They see the sun rise every 92 minutes. All this high-speed, high vantage point travel makes for some great photos and videos. But those images are more than souvenirs—they give scientists information about ecosystems, weather, climate change, and more.

Now you too can get in on the game and help NASA analyze astronaut photos of the Earth at night. Citizen scientists, rally!

The Gateway to Astronaut Photography of Earth hosts a fantastic number of images from space starting with the Mercury mission images from the 1960s to images snapped recently from the ISS. “The catalog contains more than 1.8 million photos, about 1.3 million of them from the space station and roughly 30% of them taken at night,” according to CNN.

Categorizing all those images is such a big task that researchers are calling for our help.

“Anyone can help,” says Alejandro Sanchez, a Ph.D. student at the Complutense University of Madrid, in a press release. “In fact, without the help of citizens, it is almost impossible to use these images scientifically. Algorithms cannot distinguish between stars, cities, and other objects, such as the moon. Humans are much more efficient for complex image analysis.”

Aspiring citizen scientists can contribute to three programs: Dark Skies of ISS, Night Cities, and Lost at Night. The first requires you to sort out the sparkling stars and shining moon light from the glowing cities. The second draws on your geography skills to match points on the map to points on the images. The third is the most challenging: You must identify unknown cities within a circle of 310 square miles.

“We don’t know which direction the astronaut pointed the camera, only where the station was at the time the image was taken,” Sanchez says. “Some images are bright cities but others are small towns. It is like a puzzle with 300,000 pieces.”

Why do all this work? (Besides the awesome factor?) Researchers can use colors of city lights to estimate their sources and the city’s energy efficiency, evaluate the safety and quality of road lighting, and figure out how much light pollution people and animals are getting exposed to. That last is important because though we do like to light up the night, too much light is bad for our health.

If you get tired of contributing to science and solving puzzles but still want to pretend you are onboard the ISS, check out all these videos. Enjoy crackling thunderstorms from above, ghostly dancing auroras, and the peace that comes from being high above it all.

H/T Smithsonian.com | Photo of Spain and Portugal at night from the ISS via NASA