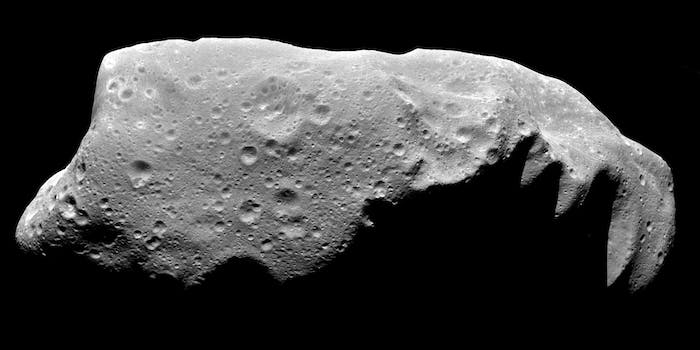 The asteroid that just buzzed Earth has its own moon

The asteroid 2004 BL86 passed over Earth on Monday, which provided NASA and space geeks the unique opportunity to study and observe it. What NASA wasn’t expecting was the surprise the asteroid brought along for the ride.

NASA revealed that 2004 BL86 actually has its own moon orbiting around it, and it was able to capture multiple radar images courtesy of the Deep Space Network antenna located in Goldstone, Calif. The photos were taken when 2004 BL86 was closest to Earth at around 745,000 miles.

NASA was able to learn more about the asteroid and its moon based on the radar data. The asteroid may only be about 1,100 feet across, but it’s able to keep an orbiting moon that’s only 230 feet wide.

It might be the first time many of us are hearing about asteroids having their own moons, but it’s not the first one NASA has encountered. Out of the asteroids that are in proximity to Earth, about 16 percent of them measuring 655 feet or larger have an orbiting moon or two.

We won’t be seeing another asteroid come near Earth until 2027 and won’t see 2004 BL86 for another 200 years, so for now we can relax and observe the information and footage we do have.