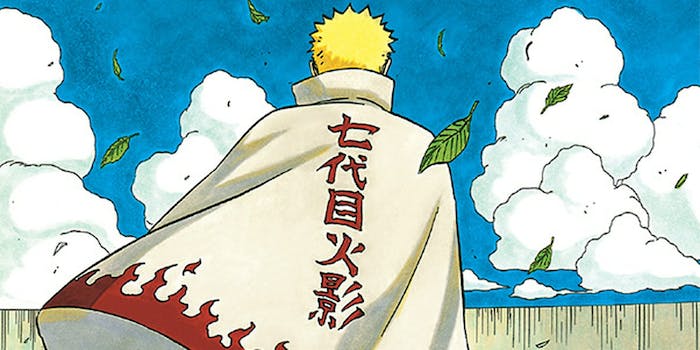 After nearly two decades, the Naruto series is finally over—but fans will be happy with this sendoff.

“The soul of a shinobi is always the same…”

At a packed main stage panel at New York Comic Con earlier this week, Naruto creator Masashi Kishimoto told fans that he had wanted to make the new film Boruto, out today in U.S. theaters, the final arc of his iconic manga. Instead, he said, he decided to focus on the possibilities of the animated film. This morning at a special screening of the film at NYCC, which featured an appearance by Kishimoto himself, along with Naruto’s famed voice actor Junko Takeuchi, fans got to see the final product. The result is a poignant coming-of-age tale, written and produced by Kishimoto, that should delight Naruto fans: the story of a father and son overcoming a drastic generation gap, a community facing the future, and, of course, the triumph of the way of the Ninja.

In other words, Boruto is full of all the heart and emotional intensity of its predecessor. It’s an obvious gift from Kishimoto to his fans, a labor of love, and a fitting conclusion to the series that became a worldwide phenomenon and introduced us to some of the most beloved characters in anime.

When the film starts, however, at least one of those characters is shirking his legacy. Naruto, devoted to his duties as the Seventh Hokage, has protected the town and allowed it to grow into a surprisingly advanced society, full of computers and ‘90s-era gameboys with hints of steampunk.

But he’s also become the classic derelict father, absent-minded and overworked, and unable to devote time to his son. Boruto is so determined to impress his father at the upcoming Ch?nin Exams (the qualifying exam that allows one to train to become a shinobi, or ninja fighter for the region) that he goes to his father’s lifelong rival, Sasuke, for training. But of course Sasuke never makes things that simple, and he inadvertently sets Boruto on a course that could disgrace Naruto and bring disaster upon the whole town.

Although the fandom was a bit chagrined by the “One Big Happy Konoha Family” ending of the manga, Boruto sells it, and sells it hard: Boruto’s desire for his father’s acceptance wars with his inability to understand him. Unlike the rest of us, Boruto didn’t see Naruto’s slow, painstaking climb to greatness over 72 volumes of manga and hundreds of anime episodes. But what he lacks in knowledge he makes up for with true ninja spirit: Even when he seems to be headed down a dark path, he’s doing it all for his family.

Of course, this is still Naruto, and it’s not long before power-hungry supervillains have arrived to challenge the Hokage’s power. A huge section of the film is quite pleasurably devoted to showcasing Naruto and Sasuke’s fighting skills in adulthood—particularly the seamless way they work together. Though Sakura fans will be disappointed with how little action she gets (along with Gaara, Lee, and all our other favorites—they’re all there, but briefly), Boruto is still the story of Naruto and Sasuke, and an unbreakable bond of friendship.

Perhaps surprisingly, the friendship between Boruto and Sasuke’s daughter Sarada is one of the best parts of the film. We have no doubt Sarada will be the eighth hokage—and that one day Boruto will be fighting by her side.

And so we leave Konoha in good hands until the next generation of shinobi come along to teach us the value of teamwork, perseverance, and love.