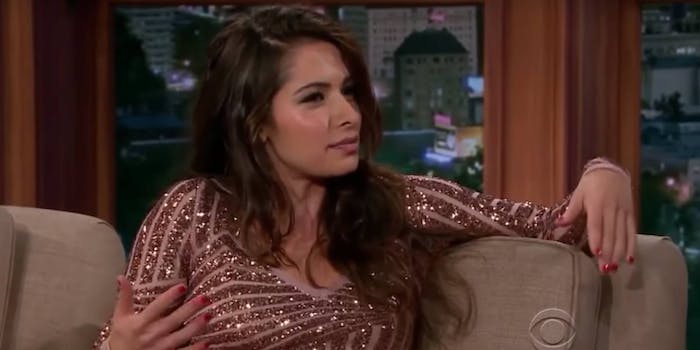 Screengrab via Craig Ferguson and the ladies/YouTube

'Drew' is now being shopped elsewhere.

’tis the season for upfronts and cancellations. What that means is that major television networks are canceling programming to make way for new shows.

CBS picked up eight new series this go round, including the legal drama Doubt, which co-stars Laverne Cox. Though the network should be applauded for its efforts to increase visibility among the trans community, its inclusivity apparently only goes so far.

The network is no longer considering a modern-day Nancy Drew adaptation starring Sarah Shahi. According to Deadline, the pilot for Drew was hindered by its strong testing, which allegedly “skewed too female.”

Nancy Drew fans have responded in full force on Twitter, voicing their support for Shahi while taking aim at CBS’ reportedly sexist reasoning in passing up Drew. Were the show to be ordered to series, it would stand as one of the very few to star a female protagonist.

CBS picked up 8 new shows. 7 are male-centric. The last 1 stars a female lawyer who falls in love w/ her alleged murderer client. #TooFemale

As with the female-led Agent Carter, which was canceled by ABC, many fans are calling on streaming platforms to pick up the series while also taking jabs at CBS. The outcry has been so strong that the hashtags #toofemale and #nancydrew began trending on Sunday.

Hey, @CBS? This is why @netflix is kicking your ass. I wish they'd take #NancyDrew and eat your lunch with it. https://t.co/drXh8715N8

Well @CBS, I think I'm #toofemale to watch any of your new shows. Sorry.#NancyDrew @onlysarahshahi

"Too female" translated = too empowering, too character focused, too many chances for women to get the wrong idea & rise up#NancyDrew @cbs

"Too Female" is one of the reasons CBS listed for why they didn't pick up the #NancyDrew pilot…. pic.twitter.com/l5opNpSzg7

Not all the Twitter chatter has been angry, however. Fans have bombarded the show’s star with messages of support and encouragement. Shahi certainly took notice.

Thank you for the ❤️❤️❤️. I believe we need strong female role models. She def could have been one https://t.co/hI9KbOAhEl

100% male/female– everyone will watch a good story. Bottom line… https://t.co/Lh23ycjRql

Wow! The outpour of love from women AND MEN is incredible. But all good! Something amazing is around the corner. #toofemale

It’s unclear what the future holds for Drew. CBS is looking to send it elsewhere. Fans are hoping it lands on a network that considers skewing “too female” as a point of pride.