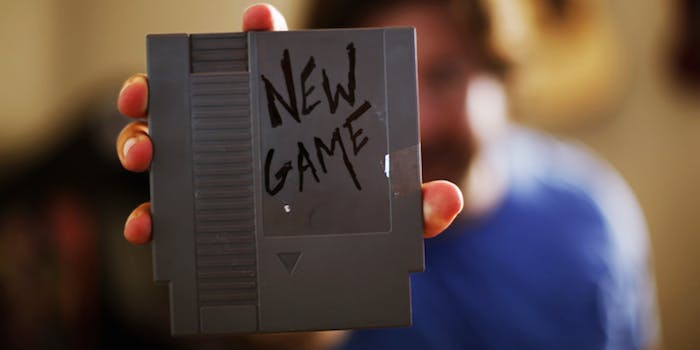 In 1987, 7-year-old Joe Granato came up with the idea for an NES game. Now he's making it happen.

In 1987, 7-year-old Joe Granato came up with the idea for a video game called Mystic Searches. With a friend, he created a storyline, manuals, map layouts, and more before sending a letter to Nintendo requesting they send “all the stuff to make our game.” Unfortunately, Granato never heard back. Like many kids, his creation was left to gather dust in his parents’ house.

Twenty-five years later, Granato stumbled across his plans for the game while visiting home. Now he wants to make that childhood dream come true by making the game himself. And he’s launching a Kickstarter to make it happen.

Of course a few things had to change from the designs Granato made as a kid.

“At seven years old, my creative ideas were naturally quite derivative of the media I was consuming,” Granato told the Daily Dot.

“Translating what is left of those old illustrations, it seems the game was meant to be an action-adventure game in the spirit of The Legend of Zelda while incorporating elements of early NES RPGs like the first Dragon Warrior or Final Fantasy. Obviously at the time, I was also completely unaware of the limitations of the console; to put it in perspective, I was still a year shy of learning my multiplication tables!”

Granato may be updating the ideas from his 7-year-old self. But the goal is to still create a game in the general style of a NES action and adventure game with RPG elements.

“There’s this really interesting contrary-motion in the development. On the one hand, we are updating the ideas through adults’ perceptions and making them narratively much more complex than the original concept. On the other hand, we have to whittle down those complex ideas to something even simpler than originally conceived to fit within the constraints of the NES.”

To create the game, Granato—a game developer and filmmaker—pulled together people who he’s previously collaborated with. They’ll develop the game for the NES but will also be providing a version of the game that’s playable on PC and Mac. While Granato loves the idea of introducing a new generation to the NES, he said he realizes not everyone has the older console. He wanted to provide an option for those interested in playing the game who may not have a version of the old console.

If you happen to own both a NES and PC or Mac though, it actually opens up a unique opportunity for playing the game. The team discovered that they could have the console game talk to the modern game by using flash memory. For example, if you unlock achievements in the NES game it can alter the world in the modern version.

“It filled us all with these cool narrative ideas on how the stories and mechanics of the two could intermingle and affect each other,” Granato said.

“We are working with all sorts of narrative possibilities from time travel to parallel dimensions to complementary stories tracing along side each other and others, but just like in days of programming for the NES, the actual mechanics will likely dictate the narrative direction we take.”

The team is also hoping to make much more than just the game with Kickstarter’s help. At the same time they want to film a documentary about the game’s creation and include tutorials based on what they learn to help others make their own NES games. Granato said he sees the documentary as “the primary deliverable of this project, even though the one that folks seem most excited about is the game.” He hopes the film can bring attention to the homebrew community and those still passionate about the NES.

Granato turned to Kckstarter for help since he knew this type of project wouldn’t be cheap between licensing, travel for the documentary, and more. The community aspect was also a draw.

“We thought Kickstarter would be a great fit for this project as we really love the idea of it being a community supported thing… A lot of people want to see a new NES adventure game as much as we want to make them one,” he said.

Photos via The New 8-bit Heroes/Kickstarter