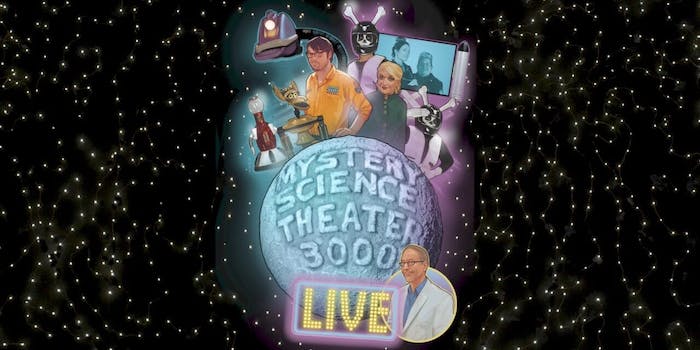 They'll be watching a cheesy B movie in a city near you.

After its debut on Netflix last month, Mystery Science Theater 3000 is going where no crew forced to watch bad films has gone before.

Creator Joel Hodgson announced Monday that MST3K is going on its first-ever tour, which will stop in 29 cities throughout the U.S. and Canada in July and August. Called the “Watch Out for Snakes!” tour, Hodgson—the original host of MST3K—and new host Jonah Heston (Jonah Ray) will be joined by Crow, Tom Servo, and Gypsy as they riff along to the cheesy B movies they’re being forced to watch. Synthia (Rebecca Hanson) and the Bonehead henchmen will also make an appearance while MST3K: The Return’s main villains, Kinga Forrester (Felicia Day) and TV’s Son of TV’s Frank (Patton Oswalt), won’t be present but they’ll be popping in courtesy of remote satellite.

The MST3K crew will be performing two completely different shows. One will air Eegah, a classic MST3K film, and feature new riffs and sketches to accompany it. The other, available in select cities, will be a “Secret Surprise Film.” If you want to see both shows, you’ll need to purchase two separate tickets.

Fans who backed MST3K’s original Kickstarter campaign will be able to purchase tickets as early as Tuesday at 10am. Tickets for the public will go on sale May 19 at 12pm local time.

Here are the complete list of dates for the “Watch Out for Snakes!” tour, along with which films will be shown during those shows.