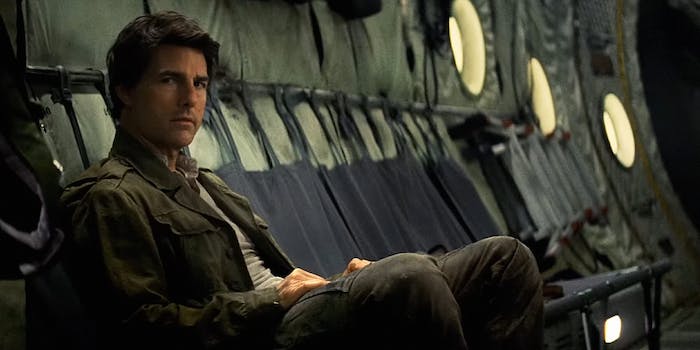 You have to hear Tom Cruise's bizarre scream in this botched trailer.

Universal Pictures accidentally posted the wrong IMAX trailer for The Mummy remake, and there’s no way to put this delicately: It’s way better than the original.

The incorrect IMAX trailer is missing half of its audio track, exposing Tom Cruise‘s raucous, gutteral screams without the comforting background noise of sound effects. The video was pulled from YouTube pretty fast, but not before several people posted copies elsewhere.

The accidental IMAX upload of The Mummy trailer without sound effects is amazing and this Tom Cruise screen is DEFINITELY the best part pic.twitter.com/IdDgZSn1tg

Dear IMAX corporation. If you show "The Mummy" like this in its entirety, I'll pay to see it at least five times. https://t.co/UOoW35oST3

.@imax bring back The Mummy trailer and I'll preorder tickets.

If only the original trailer was provoking this level of interest. Although this does kind of feel like cosmic retribution for trying to make another Mummy reboot in the first place.