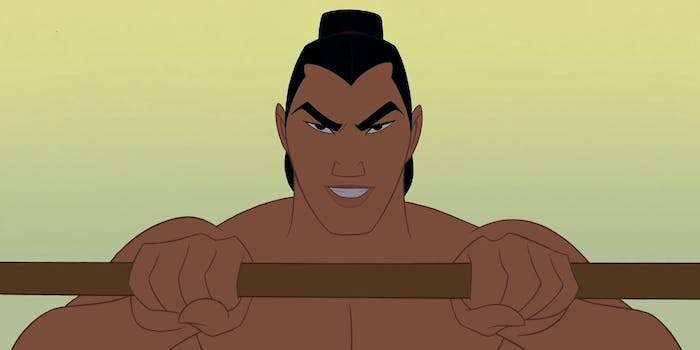 Why fans are worried about the live-action ‘Mulan’ movie

They've been wary from the beginning.

After the box office success of Beauty and the Beast, Disney is starting to look toward its next live-action remake, Mulan, but recent headlines aren’t making fans who were already wary breathe easier.

Fans of the beloved Chinese hero have been uneasy about the idea of a live-action remake from the start. Almost as soon as Disney announced the live-action film in 2015, they launched a petition asking Disney not to whitewash Mulan by casting a white actress for the role. They were also concerned after word that a spec script replaced Li Shang—the love interest in the 1998 film—with a European trader in his 30s who would aid the Chinese Imperial Army after meeting Mulan, basically inserting a white savior into the story of Mulan.

Disney, in response to the male love interest rumor, responded by stating that every primary role in Mulan would be Chinese and that Mulan would always be the main character of the film. It also launched a global search to cast Mulan. It hired Niki Caro (The Zookeeper’s Wife, Whale Rider) to direct the film, making her only the second female director of a film with a budget of more than $100 million. (The other director is Ava DuVernay’s A Wrinkle in Time.)

The company appeared to be making a conscious effort to make sure Mulan is culturally authentic. It tried to hire an Asian director for Mulan before giving it to Caro and has Bill Kong, a Hong Kong-based producer, as an executive producer. But recent interviews from Caro and casting sheets circulating the web are upsetting fans for a variety of reasons.

The lack of songs

Disney’s live-action princess movies have gone in one of two directions: keeping all the songs from the animated version (and even adding some more) like with Beauty and the Beast or cutting out the musical numbers completely, as it did with Cinderella. Mulan, according to Caro, will go the direction of the latter.

“Yes, from what I understand, no songs right now, much to the horror of my children,” Caro told Moviefone.

Mulan doesn’t have as many musical numbers as other Disney classics, nor does the plot lean heavily on the music. The songs it does have, however, are just as iconic. While it might not be a dealbreaker for a lot of people, there’s a particular level of sadness now that we won’t get to see a live-action performance of “I’ll Make a Man Out of You.”

Lea Salonga, the singing voice of Mulan and Princess Jasmine, noted that Mulan’s story has always endured and the importance of getting it right.

Caro’s interviews about Mulan are causing more uneasiness among fans. Although she has yet to work on it, they’ve taken issue with how she envisions the film.

“I haven’t started yet so I can’t give you any real detail,” Caro told ScreenCrush. “But the budget and the location and the story is offering such scope to me for [an] incredible, muscular piece of girly martial arts extravaganza in China. And I can’t wait.”

Describing Mulan—which is about a young woman who joins the Chinese Imperial Army as a man in disguise to take her father’s place—as a “girly martial arts extravaganza” isn’t sitting well with fans for both reducing Mulan’s story, a Chinese legend that’s prevailed since the 6th century, to “girly” and for comparing it to a martial arts movie.

A casting call for Mulan that originally came out in December is also getting recirculated in the wake of the “girly martial arts extravaganza” comments and the lack of music, and a main character is once again at the forefront of fan concern.

The role of Li Shang—Mulan’s commander in the animated version and eventual love interest—will appear much differently in the live-action version of the film. For one, his name will be Chen Honghui. He won’t be Mulan’s commander, but rather her rival who becomes annoyed at Mulan is able to “match or out-maneuver him.” His feelings for her will change once he learns that she’s a woman.

For some, this is an attempt by Disney to remove the bisexual context of Li Shang. While his sexuality isn’t explicitly stated in the 1998 film (which would have been extremely unusual back then), some fans believe he’s bisexual because he started to fall for Mulan when he still knew her as Ping and later spares her life when he discovers that she’s a woman.

The revived conversation about Li Shang comes as Disney’s Beauty and the Beast contained an “exclusively gay moment” and Rogue One’s quiet romantic story, so to have Disney reverse itself on one of the more LGBT characters in Disney cinema is disappointing some of the film’s most dedicated fans.