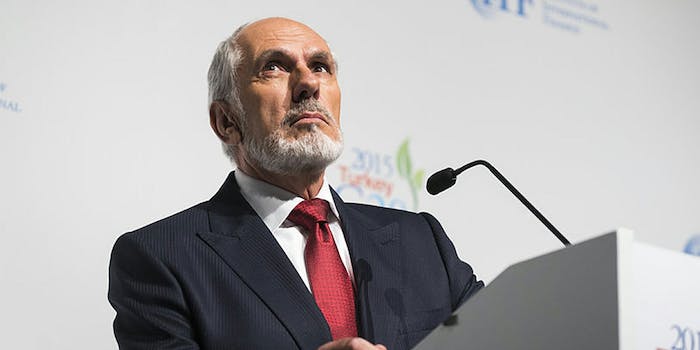 ‘Mr. Robot’ actor reflects on how the show has become uncomfortably real

'Every bad situation for Phillip Price is an opportunity.'

Despite all of the twists and turns that Mr. Robot embodies, it’s the characters who have kept us watching even during its low points. And although the connection between cyber-security engineer/vigilante hacker Elliot and Mr. Robot is at the heart of the corporate drama, it’s the supporting characters often pulling the strings.

Over the course of the first two seasons, we were given plenty of insight into fsociety—the hacking group that Elliot formed with Mr. Robot (who’s actually a manifestation of part of Elliot’s mind that looks like his late father). We watched the constant power struggle, the alternate reality Elliot built for himself while in prison, and his plan to hide Stage 2, which would cripple the corporation Elliot sought to destroy—but not without killing innocent people in the process. Still, whether it was out in the open or behind closed doors, the players with real power never really lost it, even after fsociety launched a hack to cripple the world and those in control. Despite everything lodged at E Corp, CEO Phillip Price—the man behind one of the most powerful companies in the world, played by actor Michael Cristofer—is still in charge.

In its third season, which debuted last week, the fictional world of Mr. Robot gets a little too close to reality for comfort. Yes, like so many other shows on TV nowadays, it featured a blatant reference to Donald Trump, who appears in spliced footage during Elliot’s monologues. But fans also noticed how unsettlingly similar the nature of the hack itself has become to wide-ranging real-world hacks from Yahoo to HBO and Equifax.

“It really is an accurate kind of portrayal of what’s going on in the world, so it’s a double-edged sword,” Cristofer told the Daily Dot in a recent interview. “It’s fun to be in a show that’s on top of all of that stuff, but it is terrible to think that all of that stuff is happening in the real world.”

Price is cold and calculating, and every piece of humanity he reveals is part of his game. He’ll offer you those glimpses—such as allowing Angela to listen in on a conversation between executives—before revealing cold, hard truths. And even when his schemes have pinned him into a corner, he wriggles out. By the end of season 2, he’s managed to launch his own digital currency called E Coin.

“He can do a lot, you know?” Cristofer said. “He can manipulate. Every bad situation for Phillip Price is an opportunity and whatever that situation is that he’s been in he’s out of.”

We don’t see Price at all in the Mr. Robot season 3 premiere, so we can only imagine what he has hidden up his sleeves. Viewers can still feel the effects of what Price has accomplished, and with Elliot asking Angela for a job at E Corp in the season 3 premiere, chances are Price will be a big factor in Elliot and Mr. Robot’s respective plans. It already has the feel of a much different season before Price enters the scene, as he finds himself in the midst of a “split” between him and Whiterose, who leads the hacker group Dark Army.

“I think season 2 was a very internal season,” Cristofer said. “I think it was all of the characters dealing with what had happened, asking themselves, ‘What did we do, what did we accomplish, what did we fail with, where are we now?’ I call it the internal, existential season where everyone was examining their own naval in different ways. And what happens now with season 3 is, having done all that, almost every character is now in motion.”

Like some of the figures who serve as the faces of those hacks, Phillip Price is attempting to dig his way out, albeit maybe not with the kinds of methods that Price uses. But is there a situation that he can’t outmaneuver?

“I think he loves the challenge,” he said. “I think he has incredible self-confidence about his ability to, and I do think disasters are attractive to him. I think he finds them attractive and challenging and interesting, and more interesting than if things were going smoothly. He’s like a wonderful, smart cockroach.”