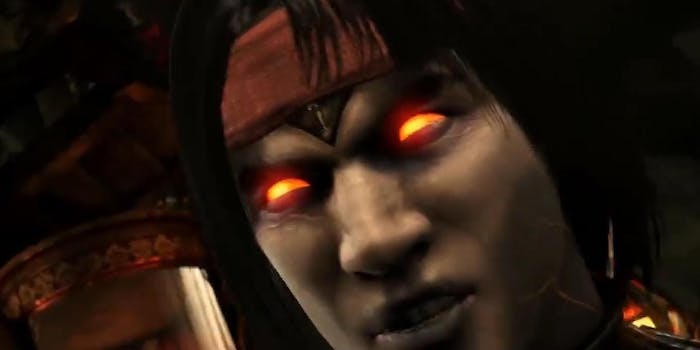 The latest trailer for NetherRealm Studios’ Mortal Kombat X has found its way online, and fans are buzzing about some old faces sporting some new looks and allegiances.

While many of the staple characters in the Mortal Kombat series had already been shown to return in the latest addition to the franchise, stalwarts Liu Kang and Kung Lao had yet to take the main stage as had some old favorites such as Scorpion and Johnny Cage. The new trailer takes care of that, and shows the returning kombatants in a very different light.

Both Liu Kang and Kung Lao would now seem to be in the service of Shinnok, the big bad villain from Mortal Kombat 4 who now returns to take the place of the defeated Shao Khan. You can tell both guys are evil because they’ve got glowing red eyes, and that’s as sure a sign as any of having one’s soul conscripted by a dark power.

It’s an especially big change for Liu Kang, the Bruce Lee-inspired hero of the series credited in the original trilogy of games with having staved off the invasion of Earth by Shao Khan and his dastardly subordinates. We even get to see Liu taunting Raiden during a pitched battle, continuing the conflict between the two characters from the 2011 Mortal Kombat reboot.

But with all of that being said, the single most notable part of the trailer may well be Sub-Zero’s appearance, if only because his character design in the clip could most accurately be described as “Kano if he were a ninja.”

Mortal Kombat X is due to release on April 15 on PC, Xbox One, and PlayStation 4.