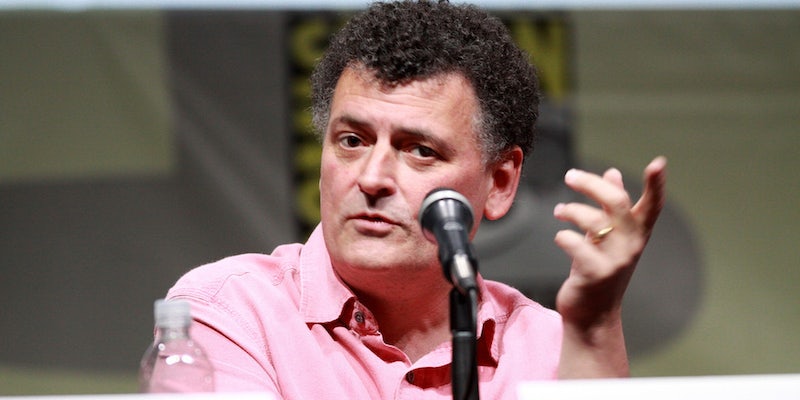 ‘Doctor Who’ showrunner Steven Moffat just talked himself into another hole

Steven Moffat is the only person left in the universe who thinks a female Doctor would be capitulating to political correctness.

Doctor Who showrunner Steven Moffat is up to his old tricks again. Yesterday at the Wales Hay Festival for Literature and the Arts, the famed Who and Sherlock showrunner went on a defensive spiel which should be familiar to Whovians: A woman as the Doctor? Not unless a woman actress is the only person he can think of for the job.

As everyone who advocated for the Twelfth Doctor to be someone other than a white man knows, Moffat ridiculed the very idea of having a woman fill those shoes. While the fandom seems excited for the new reign of hardcore fan Peter Capaldi, last year, the popular fandom choice was Dame Helen Mirren—who said herself it was high time for a woman to take on the part.

Apart from the enormous pile of evidence suggesting that Moffat would be the least-qualified showrunner in history to write a female Doctor, he seems to think it’s a matter of pride at this point to continue to uphold the bland, boring, white dude status quo. As he defensively told the audience:

“Do you know how it will happen? It will not happen that somebody sits down and says we must turn the Doctor into a woman. That is not how you cast the Doctor.

“A person will pop into the showrunner’s head and they’ll think. ‘Oh, my God, what if it was that person?’ And when that person is a woman, that’s the day it will happen.”

It seems far from likely that such a person will pop into Moffat’s head. This is, after all, the same showrunner who has never hired a single female screenwriter during his reign over Doctor Who, and has only ever hired a grand total of two female directors. Hiring women just isn’t at the top of Moffat’s priority list.

Moffat insisted that “you don’t cast for any other reason than for passion and for aesthetics. It’s not a political decision, it’s an aesthetic decision and will always be.”

So basically, the only people who’ve inspired him with passion for the role are white men. Moffat also made a statement that Capaldi was the only person who’d auditioned for the role of Twelve, which contradicts previous statements made by Neil Gaiman that the original choice for the Doctor was a black actor who’d turned down the role. Either way, it seems as though Moffat is missing an opportunity to see increased diversity for the Doctor as an expansion of all the things fans love about the Doctor rather than a limitation on the dramatic possibilities of the show.

Moffat also dropped the bombshell that respective stars Benedict Cumberbatch and David Tennant almost didn’t become geek culture icons. Why? Because according to Moffat, the BBC thought the tousle-headed lads weren’t sexy enough. Apparently, the BBC knows news, period drama, and British comedy, but not a sex symbol when it sees one.

“They said of casting David Tennant as Casanova, ‘Damn, you should have cast someone sexier.’ With Benedict Cumberbatch, we were told the same thing. ‘You promised us a sexy Sherlock, not him.'”

Yikes! This would be the same David Tennant who would go on to be voted the Sexiest Man in the Universe. And, well, we all know what Mr. Cumberbatch does to the hearts and minds of Sherlockians across the globe.

The BBC apparently ate their words after a few years of Tennant’s reign as the Tenth Doctor. Moffat claimed that when Tennant left the role, the BBC nearly canceled the show altogether:

“David owned that role in a spectacular way, gave it an all-new cheeky, sexy performance and became a national treasure. And he didn’t do it instantly, he did it over time. So the idea that Doctor Who could go on at all in the absence of David was a huge question, I didn’t realize how many people thought it wouldn’t succeed at all. That was quite terrifying when I found out about it later. I think there were plans maybe to consider ending it. It was Russell saying, you are not allowed to end it.”

In any case, it seems that the exit of Tennant has done very little to change the face of the franchise. After all, it’s still straight, white, and male.