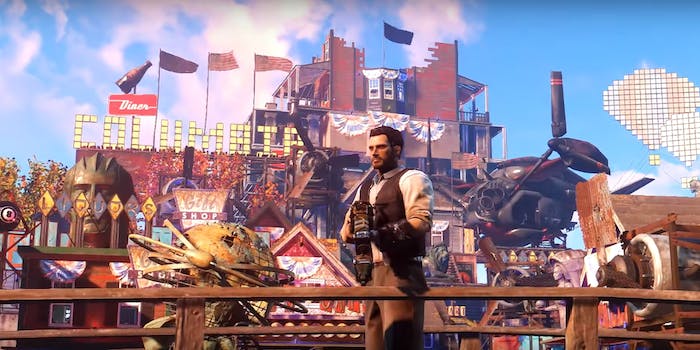 Someone recreated BioShock’s Columbia in Fallout 4

Why only build your settlements on the ground?

The sky is not actually the limit when it comes to building homes in Fallout 4.

Modder GPG Shepard, who owns girlplaysgame.com, used a mod of her own creation along with nine others to create a small slice of Columbia, the city from BioShock Infinite, in the sky above the apocalyptic landscape of Fallout 4.

Adding a build-your-own-settlement system was one of the smartest things that Bethesda Softworks added to the next game in the Fallout series. We can attest from personal experience how addictive it is. And considering the attention modders have rained on the PC version of Fallout 3 and Fallout: New Vegas, it was inevitable that the PC version of Fallout 4 would receive the same love.

Bioshock Paintings mod, designed by GPG Shepard, adds more than 20 entirely new BioShock-themed paintings to the set of decorations you can add to your Fallout 4 settlement. You’ll need to download the mod from her site. It’s the first mod mentioned in her post about the Columbia-themed settlement on her blog page for the project.

You will also need nine other mods, listed on the same blog page, to recreate your own Fallout 4 version of Columbia. Or you can download GPG Shepard’s save file for the city and add it wholesale to your game of Fallout 4 on PC.

You can also check out her site for a rundown of some of the best Fallout 4 mods available, out of the 800-plus mods created for the game thus far.

It’s only a matter of time before someone creates the other BioShock city, Rapture, in the oceans of Fallout 4. There’s certain plenty of underwater real estate available to build in.