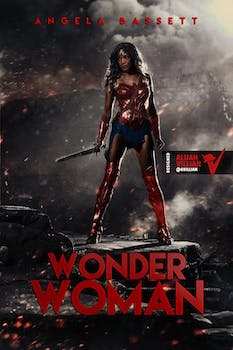 Alijah Villian has been posting his superhero photo-manips on Twitter all day, taking well-known white superheroes like Iron Man and Wonder Woman, and racebending them to look like they were played by actors of color. It’s a celebration of actors like Idris Elba, Angela Bassett, and Rosario Dawson, but it’s also a commentary on the dearth of non-white heroes being portrayed in Hollywood movies.

Hey @GabbySidibe thanks for creating a positive image for us. Black Superheroes Reimagined. This for you. pic.twitter.com/w7nt6AC7iX

RETWEET @AVAETC @google Make sure you all go and see @SelmaMovie today. pic.twitter.com/h38jJb4LgY

Who else can see @lancereddick as Professor X? #MLKDAY pic.twitter.com/qr0qGIvneH

Villian is a graphic designer by trade, and it’s clear from these fanart posters that he’s pretty darn skilled with Photoshop. Now all we need is for superhero movies to start looking more like this in real life. Can you believe we have to wait until 2017 for Black Panther?