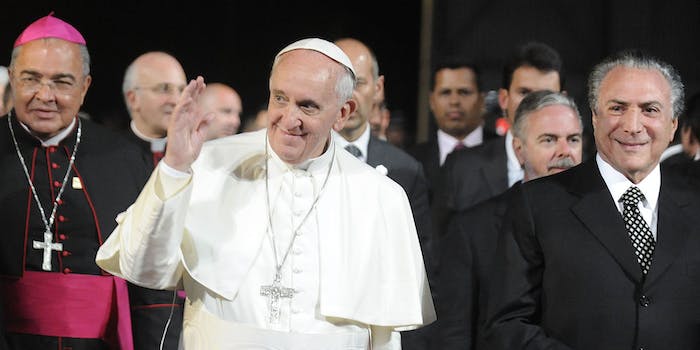 Misha Collins' Greatest International Scavenger Hunt the World Has Ever Seen lives up to its name.

People have done all sorts of bizarre and occasionally dangerous things in the name of GISHWHES, but a recent spate of pope-related tattoos may be the best example yet.

Created by Supernatural star Misha Collins, the Greatest International Scavenger Hunt the World Has Ever Seen now includes around 14,000 participants each year, competing in teams to fulfill as many of Collins’ challenges as humanly possible. This year’s tasks range from “challenge a professional athlete to a game of hopscotch and win,” (72 points) to “suck blood from a donut,” (10 points) but we’re most impressed by the number of people who have gone through with “Have an image of Pope Francis permanently tattooed on yourself.”

GISHWHES tasks are notorious for being difficult, embarrassing or surreal, but usually they don’t involve permanent body alterations. But even though those pope tattoos are only worth a measly 64 points—less than what you get for recreating the GISHWHES logo in topiary, or playing bingo in public while dressed as Batman—a whole bunch of people decided to go for it anyway.

Well @mishacollins, I now have a tattoo of the Pope fighting the Flying Spaghetti Monster. #DammitMisha #GISHWHES pic.twitter.com/KjHtAeH4d7

There’s now an entire Tumblr tag full of people posting selfies of their Pope tattoos, which is pretty impressive given the relatively small GISHWHES points payoff for getting yourself inked up. Then again, GISHWHES participants are precisely the kind of people who would do something like this, which is presumably why the task was written in the first place. Plenty of GISHWHES challenges seem to be dreamed up with one purpose in mind: For Misha Collins to find out if he can seriously persuade a bunch of strangers to do something this crazy. And in this case, the answer is a very firm “yes.”

This year’s winning team will be flown out to the Croatian filming location of King’s Landing from Game of Thrones, before setting sail on a pirate ship for a weekend with Misha Collins. There’s no word yet on whether anyone regrets his or her pope tattoo.