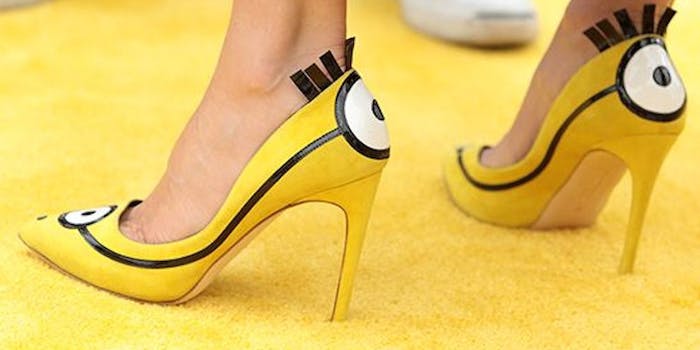 These stilettos aren't the only fashion items the 'Minions' have inspired.

It’s no surprise that sunny, bright yellow was a popular color at the Minions movie premiere in Los Angeles this weekend.

A yellow carpet and life-size Minions characters all appeared, but nothing compared to actress Sandra Bullock’s amazing custom Minion high-heels on the runway.

The shoes designed by Rupert Sanderson feature the familiar look of the characters that first appeared in Despicable Me and make quite a statement. According to People, fans will be able to bid on 10 replicas of the shoes signed by Bullock, who voices villain Scralett Overkill in the film, during an online auction at CharityBuzz.com starting Wednesday. Proceeds from the auction will benefit Art + Practice.

Sandra Bullock on the yellow carpet in our custom @Minions-inspired shoes at the LA premiere on Saturday! #minions pic.twitter.com/nPvyRiQtGg

Fans eager for a pair of the statement shoes can also purchase a pair online if they have about $820 to spare.

The Sanderson heels are just one example of how the Minions are invading the fashion world ahead of the release of their movie July 10. They are part of the Minions Bello Yellow Collection, which also includes designs by Giles Deacon, Piers Atkinson, and more.

They call it #belloyellow Check out the GILES collection celebrating the new #minions film > https://t.co/inWWBT5yym pic.twitter.com/GZlzgOY7aT

British Vogue even created a documentary-style video taking a funny look at “the influence of the yellow army on the history of international style” including interviews with some of the designers from the Bello Yellow Collection and other big names in fashion.

Considering all the ways the minions have managed to take hold in our culture, their classic yellow look showing up in the fashion world isn’t a shock, especially as a way to advertise their movie. But, the number of well-known names embracing Minions high-fashion is still impressive. It just might make minion yellow the trendy color of summer.