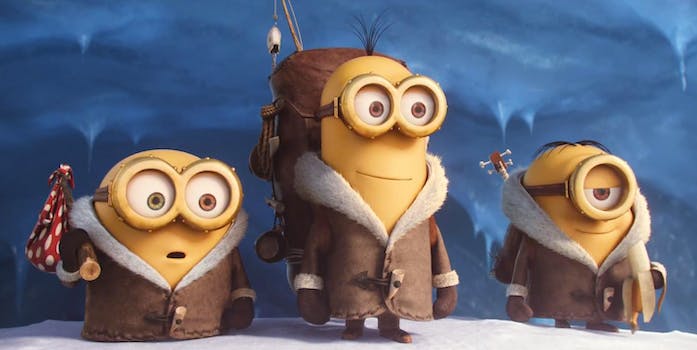 Your favorite yellow sidekicks are back this summer in their own flick.

If you’ve been wondering what the adorable yellow minions from the Despicable Me franchise were up to before meeting Gru, next year you will finally receive your answer.

The minions will be the focus of the first spinoff film from the franchise, appropriately titled Minions.

The first trailer for the movie was released Monday and gives us a look at what the minions have been up to through the centuries. According to the trailer the minions have existed long before humans, always on a hunt “to serve the most despicable master around.” Unfortunately and as hilariously seen in the trailer, they just can’t seem to keep their despicable masters from a T-Rex to Dracula alive. They become depressed until three minions—Kevin, Stuart, and Bob—decide to strike out on their own to find a new villain only to arrive in New York City in 1968, 42 years B.G. (before Gru).

It will be interesting to see if these lovable if basically unintelligible characters can carry their own film. Fans certainly weren’t shy about their excitement.

I’M SO EXCITED FOR THE MINIONS MOVIE💛💙

We’re also intrigued by the introduction of female supervillain, Scarlet Overkill, voiced by Sandra Bullock. With a ‘60s soundtrack and cast members Jon Hamm, Allison Janney and more, we’ll just have to wait until next summer to see if the minions can hold up without Gru.

The film is set to be released on July 10.