American ‘Minecraft’ players have gone to war against Denmark

It’s a twenty-first century truism that the Internet ruins everything. Whether it’s trolls attacking an in-game funeral in World of Warcraft, or Second Life millionaires being attacked by flying penises, griefing has become an unavoidable part of modern gaming.

Denmark is the latest to fall victim to such an attack, and has been besieged by patriotic American trolls in the hugely popular world-building sandbox game Minecraft.

It all started out innocently enough. The Danish government commissioned the construction of a 1:1 scale replica of the country in Minecraft—all 43,094 square kilometres of it. It was produced by the Danish GeoData Agency, using geological map data to automatically generate the landscape—including all buildings—coming to 4 trillion blocks in total.

Intended to be an educational resource, the complete data file comes in at a staggering 1 terabyte—around 4,000 times the size of the game itself.

Minecraft allows multiple players to enter the same map together simultaneously online, and a few ground rules were put in place to ensure basic etiquette is maintained. These included rules against bullying and swearing, and a ban on the use of TNT in-game. Before long, however, the vandals descended.

“Several large Danish towns have been leveled to the ground,” Chris Hammeken, chief press officer at the Danish GeoData Agency, told The Register. Though dynamite is off-limits, innovative griefers made use of an exploit allowing use of the explosives if placed in a minecart beforehand. Vandals have also flooded swathes of the landscape with water, according to a Danish-language news site says (via Google Translate). 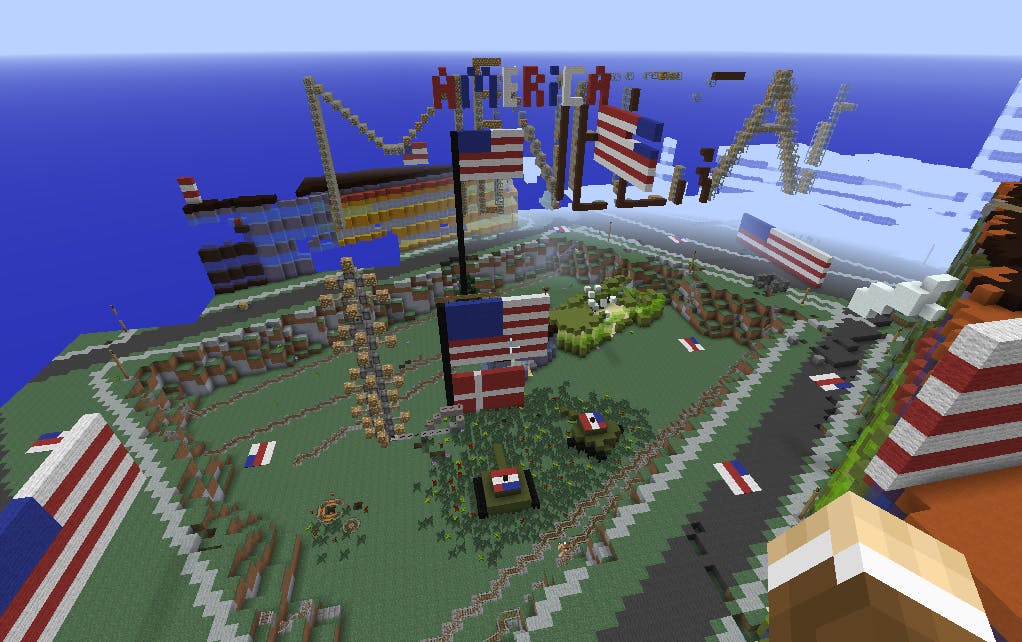 Like conquering heroes, the Americans have marked their conquest by constructing oversize American flags, tanks, and writing AMERICA in red, white and blue across the sky.

Copenhagan, as well as some of the other major cities may be rebuilt, but there are no plans to reboot the entire map. “We consider that as nature of playing Minecraft,” a spokesperson said: “elements are broken down and new are being created.Therefore we will not reboot the demonstration of Denmark in Minecraft. But occasionally we will rebuild minor areas if buildings are removed and nothing new is being created. We are very happy to see so many players around the world creating fancy nice things and have fun.”