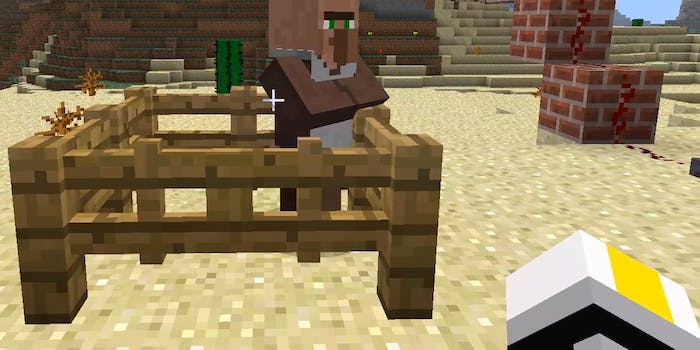 This übernerd redubbed all 489 Minecraft sounds, and it’s weirdly awesome

It's a meticulous remix for the sandbox game.

Fans of Minecraft now have an interesting choice when it comes to sound effects within the popular sandbox game: They can stick with the original programming or download a resource pack that replaces all those noises with one person’s (rather good) vocal equivalents.

No doubt you’ll want to get a feel for that version of Minecraft before you dive in, so here’s a video from YouTuber R2Bl3nd, the guy who undertook the arduous task of rerecording every sound in a rich virtual universe. From musical tones to a groaning nether portal to the swish of an arrow shot from a bow, he’s got the entire sonic palette covered.

But these examples are just a fraction of the sounds, both new and old, that the newest edition of R2Bl3nd’s modification pack contain—489 in total. “It was hard work,” he wrote, “but I believe it’s paid off, and I made sure to get everything just right this time.” Still, he’s willing to take constructive criticism.

So what are you waiting for? Go ahead and download it. It’s probably worth it for the pig grunts and cow mooing alone.