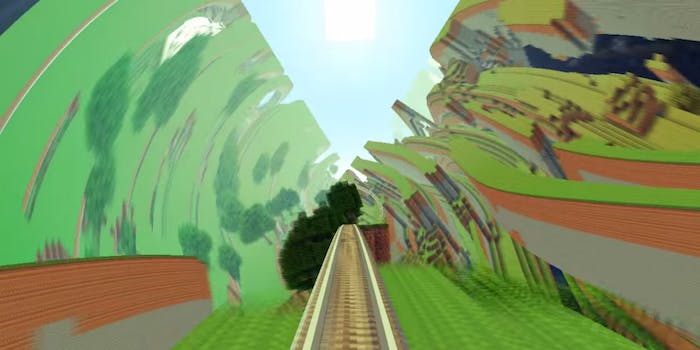 Lose yourself in this psychedelic Minecraft music video

A Minecraft experience unlike anything you’ve seen or heard before.

We’ve seen some amazing things in Minecraft, but we haven’t come across a bona fide music video before.

A combination of precision timing and mods are the basis for a trippy Minecraft train ride called Acid Interstate. The railroad track in the video is composed of 16,000 blocks, and it takes 33 minutes to travel the entire length of the track in real time. The video runs at eight-times the normal speed, however, so it takes a little more than four minutes to complete the run.

The visual effects are great, but pay attention to the pairs of lanterns that appear at the sides of the track on beat, like notes on a Rock Band track, for the length of the entire video. Acid Interstate is a beautiful piece of Minecraft work.

YouTuber MiningGodBruce says that it took more than 70 hours to complete the video. Early work in progress videos, links to all the mods and tools used to construct the video, and a link to “Meridian,” the song he laid over the acid train trip, are all available below the video.