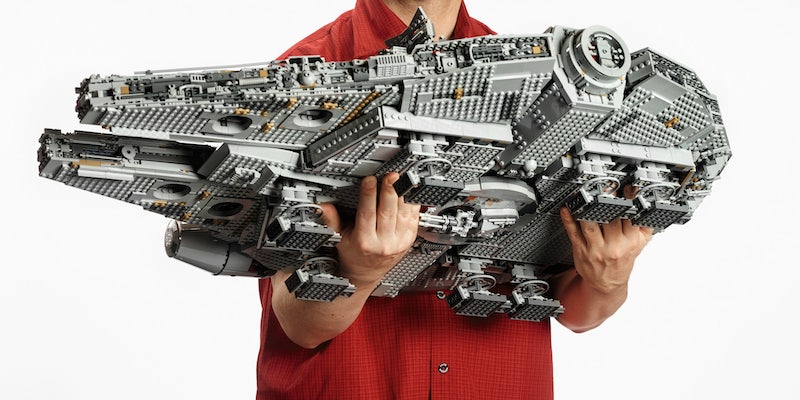 It literally can't get much bigger than this.

Not only is the new Ultimate Collector Series Millennium Falcon the biggest Star Wars Lego set released yet, it may end up being the biggest Lego set ever.

“We are very, very close to the limit of what you can build,” said Jens Kronvold Frederiksen, design director for Lego’s Star Wars line. “I don’t think you can expect anything much bigger very soon.”

At 7,541 pieces, the UCS Millennium Falcon—which goes on sale this month—is a veritable monster. It stands 8 inches tall, 33 inches across at its longest point and has a diameter of 22 inches—about the size of a car tire.

The box it comes in is so big Lego had to figure out how to ship it without banging up its corners. Even the instruction manual is massive at 496 pages.

The main factor that will keep future sets from getting much bigger, Frederiksen explained, is that the gripping power of Lego can only support so much weight. At 24 pounds, the Falcon is already “pretty close to that.”

The new set is also setting new heights in pricing. At $799, it’s the most expensive new Lego set yet. (Some sets are more expensive on the secondary market, but this Falcon’s price tag already rivals some rarer collectable sets.) Designers at the Danish company weren’t sure such a costly release would sell in large numbers, but so far, sold-out pre-orders are proving them wrong.

The lofty price tag is tied to the design process, which deviated from the norm in how Lego sets are designed. Ordinarily, design teams get a set size and price range to work with. But with the UCS Falcon, management gave them carte blanche to design the best model they could.

To start, the team looked at customer feedback from the first UCS Falcon, released in 2007, to see what could be improved. At the top of the list, Frederiksen said, was the inclusion of some interiors, which were non-existent in the earlier version.

For the new version, the designers opened up the inside to include sliding gun turrets, the smuggling compartment used by Finn, Rey, and BB-8 in The Force Awakens and, of course, the lounge area where C-3PO urged Luke Skywalker to “let the wookiee win.”

The designers also decided to pay homage to the Falcon’s long, cross-trilogy heritage by including both the circular radar dish from the original films and the more rectangular version from the new movie.

To go with that, there’s a wealth of included mini-figures—Finn, Rey, and BB-8, plus Leia, Chewbacca, C-3P0, and two versions of Han Solo, both young and old. And for completion’s sake, there’s also a mynock, the bat-like monster the heroes encounter inside the belly of the giant slug-like exogorth in The Empire Strikes Back.

Finally, the designers reworked the 2007 cockpit by replacing the simple frame with one solid translucent piece. All told, the updates added 2,000 pieces to the build’s predecessor, which inevitably pushed its cost up.

As far as Frederiksen’s team was concerned, there was never a plan to create the biggest, most expensive Lego set ever, nor was it specifically chosen to get that honor.

“We didn’t know how big and how many pieces it would have. That wasn’t a decision we made. It just ended up being that big,” he said. “It’s a fantastic way to work because we didn’t have any limitations.”

The ship’s girth explains why sales have been brisk so far. Barring any major new breakthroughs in brick engineering, the UCS Millennium Falcon may very well remain the largest Lego set for a long time to come.