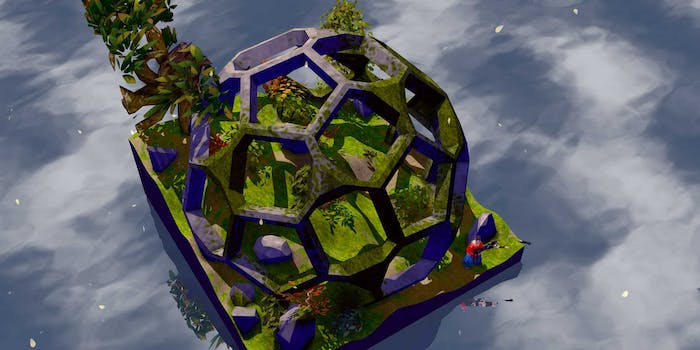 Challenge your brain to keep up.

We’ve seen some innovative and unique puzzle games in the past, but none that messes with our perceived fabric of reality.

Miegakure, a new puzzle game, has players shifting between the third and fourth spatial dimensions to solve puzzles.

It’s rather hard to explain. The following GIF can help us perceive fourth-dimensional space more easily.

If you’ve ever played FEZ or Paper Mario and the Thousand Year Door, you’ll have some experience with multi-dimensional gameplay. Using the advantages and limitations of each dimension to your advantage, players can cross gaps and reach destinations that would be otherwise impossible. Miegakure really forces us to think in the abstract by using this design.

If that didn’t make any sense, that’s ok. It’s not the easiest thing to pick up. Here’s a GIF from Miegakure that may help.

Miegakure has been in development for quite some time and updates have been incredibly sparse. There’s no word yet on when it may be released. The last accolade the game received was during Indiecade 2010.