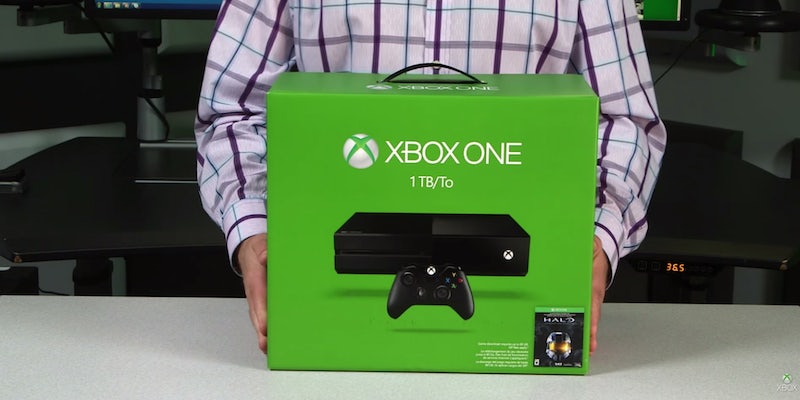 Microsoft just fired the next shot in the console wars.

Microsoft on Tuesday announced a new Xbox One bundle that addresses two major shortcomings of the original console at a price meant to compete directly with Sony’s PlayStation 4.

A $400 Xbox One with a redesigned wireless controller and a 1TB hard drive will hit the market on June 16. That is the current price of a PlayStation 4 unit, which comes with only a 500GB hard drive. When current-gen console games have to be installed on the console’s hard drive before they are playable, the difference in storage space really matters.

The redesigned controller can now accept hardware updates without being physically plugged into the Xbox One console, a requirement that felt slightly ridiculous. More importantly, it has a standard 3.5mm stereo jack just like the PlayStation 4 controller. Current Microsoft-made Xbox One headsets have an adapter between the headphone cable and the control pad, limiting gamers’ choices as to which headsets they can use with an Xbox One. Gamers might miss the convenient volume and mute buttons located on said adapters, but choice is everything.

The new controller can also be purchased separately for $65.

The current Xbox One that comes with a 500GB hard drive will be permanently priced at $350. For a long time, this has effectively been the normal price point, though it was always couched as part of a sale or a bundle deal.

Sony’s advantage at the beginning of the eighth-generation console war in 2013 was PS4’s price, which started at $400. Microsoft answered with a $500 Xbox One that came bundled with a Kinect camera hardly anyone wanted, and Sony took a huge early lead in sales figures for new console hardware.

The Xbox 360 console evolved considerably since its launch, so it was expected that the Xbox One would follow suit. First Microsoft dropped the requirement to buy a Kinect along with the Xbox One console. Major updates to the Xbox One’s operating system then made it easier to navigate the UI and record video clips without voice commands. A more recent update added standard functionality like voice messaging.

With today’s announcement, Microsoft has finally positioned the Xbox One where it probably ought to have started in the first place. 500GB is way too little storage space on a game console in 2015, and the lack of flexibility on the Xbox One’s headset was leading to unfavorable comparisons with Sony’s product.

Expect Sony to answer Microsoft with a PS4 with a larger hard drive in the very near future. As the hardware evolves on both sides of the aisle and the consoles become more similar than they are different, success or failure in the console wars will come down to exclusive games.

As they do every year, Microsoft and Sony will give console-exclusive games and content top billing during their pre-E3 press conferences on June 15, the Monday before the Expo begins.